For the record, in calendar year 2014 Mother Nature dumped 1,245 mm of rain on us and we’d like to use this to highlight a little known fact about us. In an era when very few Australian vineyards are dry farmed, both Moss Wood and Ribbon Vale remain unirrigated.

The explanation isn’t difficult to understand if we consider the amount of rain we get. Our average rainfall is 1003mm, significantly wetter than the area where Keith grew up, McLaren Vale in South Australia, where mean annual rainfall is 500mm. Vines get plenty of water from the sky in Margaret River and during the 39 growing seasons Keith has experienced at Moss Wood, the crop has virtually never been adversely affected by drought. Instead, our yields have been limited by events associated with wet conditions – rainfall at the wrong time, hail, heavy winds and so on and the 2015 Pinot is a classic example.

High yield is not a priority at Moss Wood, our emphasis is on quality, so how do we compare? The Australian benchmark for yield, across all varieties, is around 12t/ha (tonnes per hectare) but Moss Wood Pinot Noir yield is 6.3 t/ha. Not unreasonably, people may look at that difference and wonder how lower yielding vineyards could be viable. The answer is in the quality produced – the better the quality the higher the price a wine can achieve in the market. The reality for a cool, wet region like Margaret River is high yields can be a serious threat to quality because we don’t get sufficient warmth to properly ripen big crops, even with an early ripening cultivar like Pinot Noir. The natural irrigation we get from Mother Nature is more than enough to sustain quality yields.

Which leads us back to the 2015 Pinot Noir with its heroically small yield of 3.64 t/ha and a classic example of how our conditions can count against us. We have two clones which flower at slightly different time and results in a flowering period of around 28 days. Through that time in 2014 we had 16 days of rain, for a total of 68mm, all of which disrupted pollination, not to mention the 12 nights where the temperature dropped below 8⁰C causing all recently opened flowers to give up altogether. No surprise that we lost some bunches and those that remained were about half normal weight.

Much more important is how the season affected wine quality and the news is all good.

In future, we are sure people will wax lyrical about the last decade of Margaret River vintages and when they do, 2015 will be one of the shining stars. The Pinot Noir enjoyed many hours (949, in fact) in the ideal temperature range of 18-28⁰C and along with that, virtually no extreme heat. The hottest day was 37⁰C and in fact the vines only received 33 hours above 33⁰C, almost verging on too cool.

Suffice to say, ripening was slow and easy, with the vines taking 106 days to get from flowering to harvest, 6 days longer than average. The ripeness of 13.8⁰ Baume, was slightly above the average of 13.4⁰ and the fruit was in excellent condition, with no disease or bird damage.

All picking was by hand and started on 6th February.

As with all Moss Wood Pinot Noir wines, the 2015 has generous fruit and good balance and so can easily be enjoyed now. However, it will definitely repay those patient souls who are prepared to tuck it away in their cellars. Until the wine reaches 10 years of age, the primary red fruits will be the dominant feature but in the decade following, the classic old Pinot Noir bottle bouquet will reveal itself. This means the strawberry and cherry fruit will have a background of complexity, made up of unusual farmyard notes – earth, tar, meat and leather. Into its third decade, the wine will reach full maturity, such as required by the patient ones and the complex notes will be the dominant feature. A likely final “drink by” date is difficult to predict but all our old Pinots continue to age well into their fourth decade and we expect the 2015 will do the same.

Colour and condition: Medium to deep ruby hue. Condition is bright
Nose: A floral and scented nose with a bright combination of strawberry, cherries, quince jelly and musk. In the background there are soft oak notes and just a touch of earthiness.
Palate: This displays the same intense fruit notes of the nose, with generous strawberry fruit flavours, medium weight, good acid and tannin balance and great length.

The fruit was delivered to the winery where it was sorted, destemmed and placed into small, open fermenters. Fermentation was by multiple yeast strains, plunging for extraction of colour and flavour was done 3 times per day and temperatures were controlled to a maximum of 32⁰C. The various batches were pressed after 15 days on skins and were put into 228 litre French oak barrels, 20% of which were new and where the wine stayed for 20 months.
At the end of maturation the barrels were blended and assessed for tannin balance. Fining trials showed the wine had excellent balance and did not need adjustment. It was then sterile filtered and bottled on 21st November 2016. 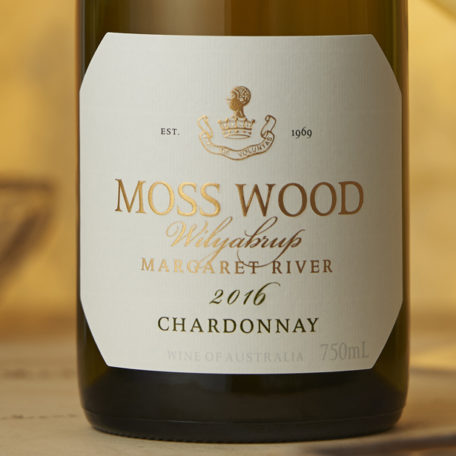 Well, folks, we start of the discussion of the 2016 Moss Wood Chardonnay by noting that Margaret River racked up another excellent growing season in 2015/16.  Rainfall in calendar year 2015 was a solid, if slightly low, 959mm.  During the growing season we received 257mm and 30mm of this fell during Chardonnay’s flowering period.  This wasn’t ideal and restricted yields somewhat but the nights weren’t cold and that certainly worked in our favour.

Overall, the temperatures were very reasonable, with the Chardonnay experiencing 1039 hours between 18⁰C and 28⁰C, plus some good warm days, two of which saw the mercury reach 39⁰C, giving a total of 56 hours above 33⁰C.

The median harvest date of 26th February was 5 days earlier than average, although the time elapsed from flowering to harvest was slower than average, 117 days compared with 113 days.

All this suggests the weather was benign but in fact Mother Nature threw us a big curve ball, a hint of which can be seen in the last paragraph.  Why was the season period from flowering to harvest extended by 4 days?  The answer is, we had 115mm of rain during January, 106mm of which fell over 3 days, the 18th, 19th and 20th.  This was very worrying but by a combination of good luck and good management we were able to get through with no damage, although it was all a bit close for comfort.

The good luck came with the timing.  Rain can cause the fruit to split, which in turn allows rot to take hold.  Fortunately, all the varieties still had hard green berries that are resistant to splitting but had the rain come a week later, with the resulting increase in ripeness, the Chardonnay grapes would have been softening and very prone indeed.

Without wanting to take too much credit, we can also claim our management made a contribution as well.  Yes, the timing of the rain was in our favour, but any rain can promote fungal infections on the leaves and the fruit.  That this didn’t happen is a tribute to our spray program and we’d like to think this is the result of our careful work in this area.

As with all industries, technology advances and wine is no different.  For the 2015/16 growing season we took a significant step forward and replaced our old-fashioned “air blast” fungicide sprayer with a new, self-calibrating machine which captures and recycles any spray drift.

The accuracy and efficiency of the new unit has exceeded our expectations.  Spray volumes are accurate to within 5% of our target and there is no waste.  The recycling system ensures any liquid that doesn’t hit the plant is recovered and returned to the tank.  There is no unnecessary drift into the environment and refills are reduced, so spraying time is cut by half.  Most importantly of all, under extreme conditions, the spray program worked.

Having got the fruit safely past these various challenges, harvest commenced on 26thFebruary at a ripeness of 12.6⁰ Baume.

Here at Moss Wood the consensus is this is quite likely the best Chardonnay we’ve made since 2006 and looms as a rival for Keith’s favourite, the 1984. Speaking of the latter, when we tried our last bottle in 2016, it had survived the journey to 32 years old and done it in style. We have the same expectation of the 2016 and believe it will show off its great fruit depth for the next decade, after which the bottle bouquet will gradually emerge, such that full maturity should be reached around 20 years cellaring. Beyond that, it should age slowly and gracefully to beyond 30 years of age.

Colour and condition: Light to medium straw hue, with green tints. Bright condition.
Nose: Lifted fruit aromas of peach, lime and quince with fragrant orange blossom notes. Behind this is a rich background of roasted nuts, caramel, cheese and soft oak, leaning towards cinnamon and toasty notes, almost toasted hot cross buns.
Palate: This brightness is also reflected on the palate where generous peach and grapefruit flavours mesh with crisp acidity, full body and a firm tannin to give great length and mouthfeel.

All the fruit was hand-picked, whole bunch pressed and then the juice was settled in stainless steel tank for 48 hours.  Once clarified, it was seeded with a mixture of different yeast cultures and racked to wood for the primary and malolactic fermentations.  All the barrels were 228 litre French oak and 50% were new.

After 16 months, all the barrels were racked and blended in stainless steel.  Fining trials were carried out and the wine was fined with bentonite for protein stability and no other treatments were necessary.  It was then sterile filtered and bottled on 2nd August, 2017. 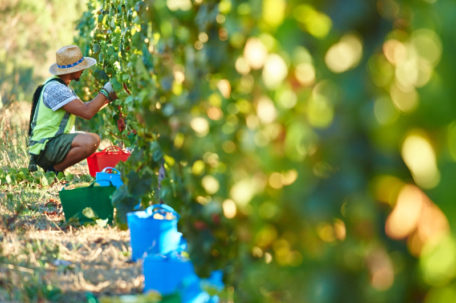 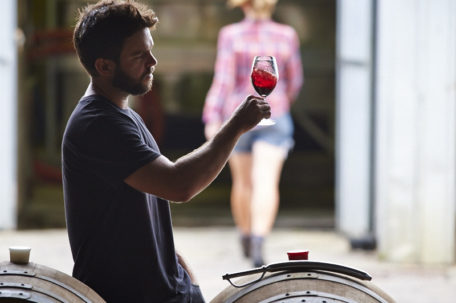 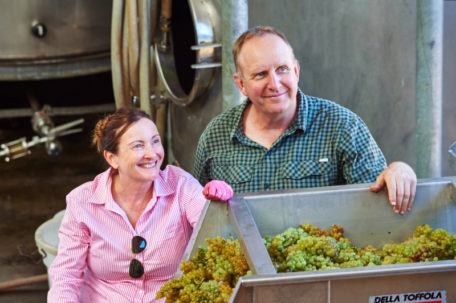 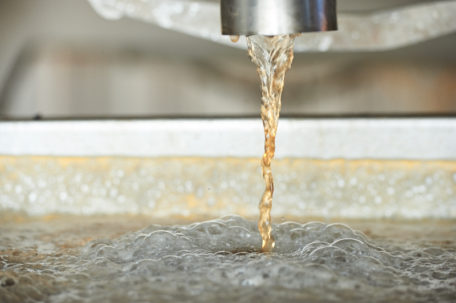 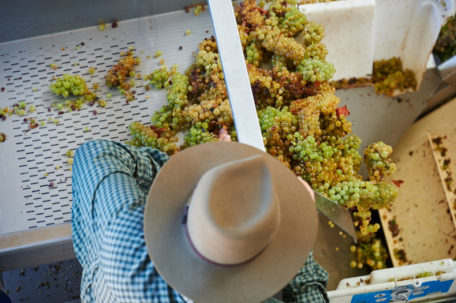 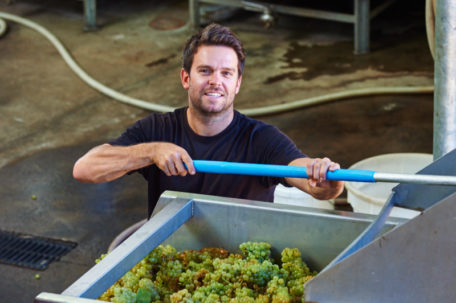 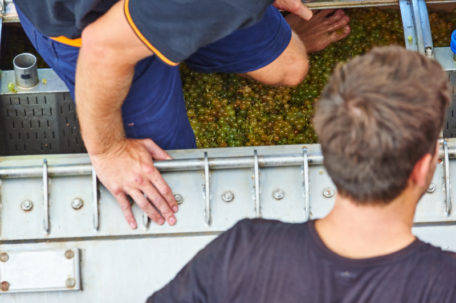 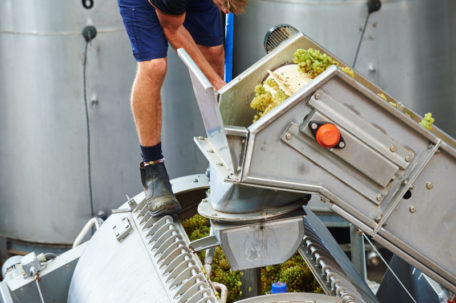 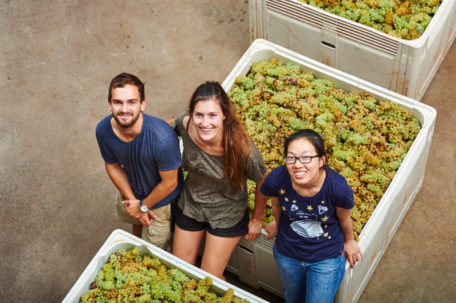