We couldn’t have been happier with the 2015/16 season. The spring weather was very respectable indeed.  Our 2015 calendar year rainfall of 959mm, although 5% below average, was still within the more than adequate range for vine hydration in our mild climate.  Flowering for the Cabernet varieties was good, with only 4 days when the temperature dropped below 8°C and only 6 wet days, so conditions were very much in our favour.  By early January 2016 we were feeling very pleased with ourselves.  We’re always optimistic but cautious.  The consistent quality of vintages, especially with Cabernet Sauvignon, is testament to how benign Margaret River’s climate is.

There is no better way to understand this than by examining the temperature record for 2015/16.  The vines enjoyed just the sort of temperatures that allow them to ripen steadily.  In the end they received 1095 hours between 18°C and 28°C, their ideal range.  There were 8 hot days, where the temperature reached 35°C, and the highest maximum was 39°C on 7th January and 7th February.   Cabernet Sauvignon, in particular loves this warmth and we are happy if it receives 50 hours above 33°C and in 2016 it had 72.  In summary, Cabernet Sauvignon ripened just about perfectly.

Just to ensure readers don’t think we’re becoming smug, we should add that perhaps Mother Nature took the view we were becoming complacent?  After all, she’d given us some classic seasons in the last decade and especially the last two releases, the 2014 and 2015 vintages.  On 18th January, she gave us the first of 4 days of rain that delivered 107mm.  This produced a collective holding of breath in Margaret River while we waited to see the impact.  As a matter of reassurance, unirrigated vineyards like Moss Wood and Ribbon Vale usually respond well to such events, especially if the timing is right.  In this instance, things were in our favour because the fruit was still green and not soft enough to split and the vines took up the moisture without a problem.  Similarly, the Cabernet varieties resist bunch rot reasonably well and combined with our fungicide program ensured the crop remained healthy.

We got several further rains, including a very handy top up of 20mm in mid-February which really did the vines good, ruling out any risk of moisture stress towards the end of ripening.

All three varieties, Cabernet Sauvignon, Cabernet Franc and Petit Verdot were all ripe roughly a week ahead of average and everything was going according to plan until the we started weighing the bins as they arrived at the winery.

To our amusement and not to mention disappointment, yields were down around 40%. What did we say about smug?  We have put our viticultural thinking caps on to try and understand this but our best explanation is after the excellent crops up to and including 2014, we suspect the vineyard nutrition has waned and we are working towards restoring this with mineral fertilisers and compost.  It is important to understand that since the wine leaves the property, going to markets all around the world, never to return and taking with it numerous important nutrients from the soil, we need to replace these losses from outside sources.  All the organic matter we produce but do not use, for example the bunch stalks and grape skins, is composted and returned to the soil.  However, this is not sufficient to cover the deficit and hence the need to fertilise.

Regardless of the reduced quantity, we couldn’t have been more pleased with the sugar levels and flavour ripeness.

All the fruit was hand-picked and delivered to the winery where it was de-stemmed and placed into small, open fermenters, where each batch was seeded with multiple yeast strains.  Fermentation was maintained at a maximum of 30°C and extraction of colour and tannin was by hand plunging, 3 times per day.  It is a testament to the ripeness of the fruit that skin contact times were relatively short, with Cabernet Sauvignon on skins for 2 weeks, Cabernet Franc for 9 days and Petit Verdot for 12 days.

After pressing each batch underwent malolactic fermentation in stainless steel and was then racked to barrel through April 2016.  All the barrels were 228 litre French oak barriques and 18% were new.  On 22nd January 2018 the final blend was made up and returned to barrel, where it stayed until late October 2018, when it was racked to stainless steel in readiness for bottling.

We pride ourselves on ensuring Moss Wood Cabernet Sauvignon is ripened as well as the vintage allowed but each year, just to be on the safe side, we carry out fining trials to assess tannin balance and see if it can be improved.  Once again with the 2016, we found none of the agents benefited the wine, so it remained unfined.  It was then sterile filtered and bottled on 6th November 2018.  The bottling included 350 individually numbered 1.5 litre magnums. Showing all the classic Moss Wood aromatic features with Cabernet Sauvignon’s blueberries and mulberries, Cabernet Franc notes of blackberries and violets and Petit Verdot giving sweet musk lollies and dark jubes.  Since the wine had such long barrel age, these fruit notes are underpinned by tar, leather and cedar notes as well as a touch of charry oak.  These all combine to give the ‘16 a notable intensity, making it one of the more complex Cabernet Sauvignons we’ve made for some time, sharing many similarities with the mighty 2005.

Each of the varieties work their magic on the palate, combining to give generous blueberry, blackberry and red currant flavours.  As we mentioned above, the season delivered near-perfect conditions for fruit ripeness and this is evident in the tannins which are classic Moss Wood.  The requisite balance, smooth and supple velvet texture are present but the tiny yields have given greater concentration, meaning there is a density only seen in the very best years.  Everything is rounded out by a subtle oak note, just a little reminder of its 2 years in French oak barriques.

The youthful intensity of the wine is such that it can be consumed as a youngster.  The aroma intensity and palate concentration really lend themselves to enjoyable early drinking.  Nevertheless, it will reward those with patience.  We noted the similarity with the 2005 and that vintage is just beginning to show some maturity at 14 years of age.  We are very confident the 2016 will develop in a similar way, reaching full maturity at around 25 years of age.

What a difference 3,000 kilometres makes.  As southeastern Australia sweltered over summer, here in southwest Western Australia it has been unseasonally cool.  Since the beginning of October, we’ve had below average temperatures and above average rainfall.  It has made for very comfortable living conditions for the locals and our vines, but not such great beach weather for all our visitors.

At the time of writing, we have started the 2019 harvest on 1st March with a pick of Ribbon Vale Sauvignon Blanc, 10 days later than average.  To emphasis the moderate season, next cab off the rank was the Pinot Noir D4 clone on 8th March, roughly two weeks later than average.

In a year like this, very similar to 2017 and 1990, we expect to make wines notable for pretty aromas and the early indications are very good indeed, with both the Sauvignon Blanc and Pinot Noir showing quite ethereal scents.  We have only one complaint – yields are down, courtesy of the aforementioned conditions.

One last story about 2019.  Birds, in particular silvereyes, have long been a damaging pest for the Margaret River wine industry but grapes are not their preferred food source.  If the native Red Gums have a good flowering, the birds are hardly ever seen but this year is the worst blossom since 2008.  It has been virtually non-existent, so it has been party time in the vineyards for the silvereyes.

It’s not nice to see them so hungry but in this mood they wreak incredible damage in a very short time and they tend to lose our sympathy.  We can keep them out using nets, an expensive process but very effective.  We don’t have enough nets to cover the entire vineyard but normally this is sufficient to deter them because they rarely fly far from the perimeter.

However, this year, as soon as they find an unprotected section, they are flying in from everywhere.  Even the covered areas are under attack, with the birds dive bombing the net, trying to get to the grapes.  It’s hard to know the likely losses at this stage but they will be the worst for some time.  It also adds to our picking and processing costs as we sort through the fruit, making sure nothing gets in that will compromise the final quality. 2019 is the 50th birthday of Moss Wood Cabernet Sauvignon.  The first plantings in what we imaginatively call the “Old Block”, took place in September 1969.  We are, of course, still 4 years away from celebrating the 50th anniversary of our original vintage, 1973, which we think will be cause for a big celebration.

It is nothing short of remarkable what has developed since Sandra and Bill Pannell followed Dr John Gladstones recommendations about the viticultural suitability of Margaret River’s climate and put the first vines in the ground.  The speed with which the region’s reputation has since evolved is hard to believe, given the normally glacial rate at which the wine industry typically moves.  Clare and Keith have nothing but admiration for John Gladstones, the Pannells and all the pioneers of the area.  It took big dollops of imagination, commitment and perseverance to get things moving.  There was no previous experience to utilise, no infrastructure to provide support and not inconsiderable scepticism about whether a wine industry would actually be viable.

It has been quite a ride but the most significant thing for the Mugfords has been the incredible affection so many people have shown for our products from our little vineyard.  Humbling doesn’t even begin to describe it and we are very grateful.

A Big Thank You to Gina 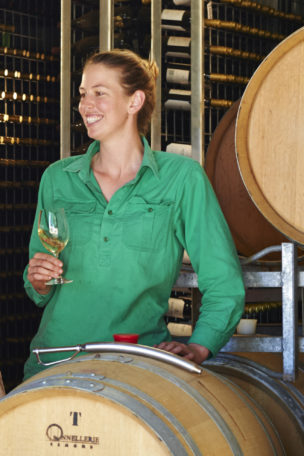 Clare and Keith have been lucky enough to have many great people work with them over the years and one of the best was Gina White.  A Mudgee girl, she joined us in 2013 and did a fabulous job here in the vineyard and winery, as well as representing us in the wine trade.  However, last year the call of home became too strong and Gina resigned and is heading back to NSW, via McLaren Vale.  We accepted her resignation with sadness but wish her all the best for the future.  Her efforts on our behalf are much appreciated. 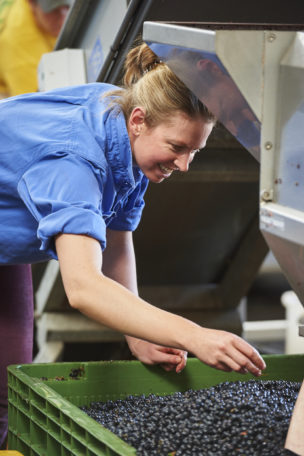 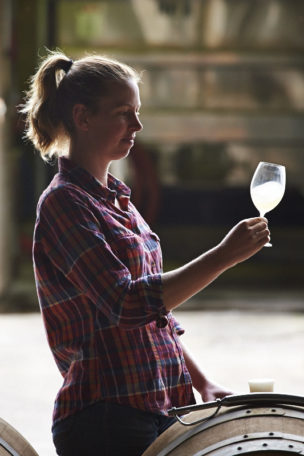 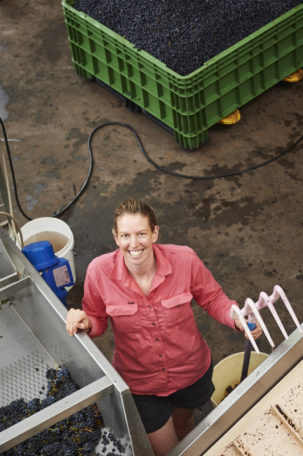 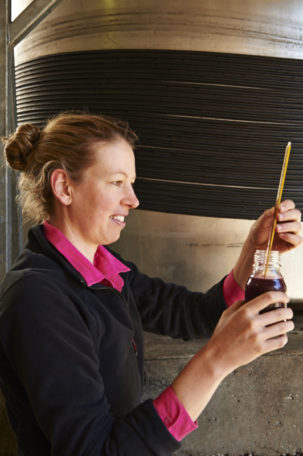 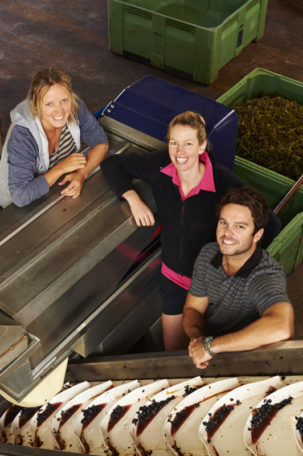 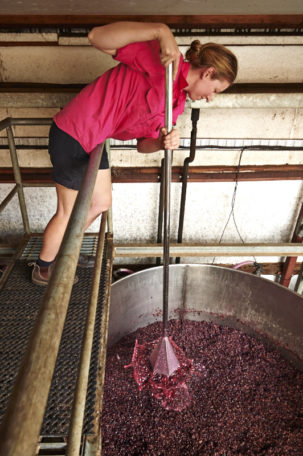 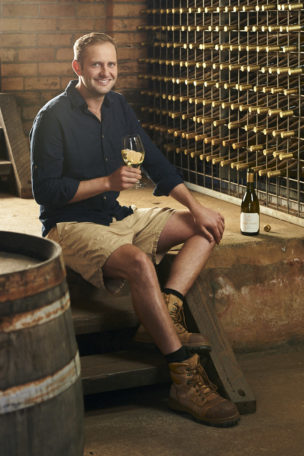 On a more positive note, after swanning around in South Australia since 2012 and pretending to study (and passing) Viticulture and Oenology at Adelaide University, where his focus seemed to be more on cricket and football, Hugh Mugford rejoined Moss Wood at the beginning of 2019.  More seriously, after a genuinely interesting job as a Technical Officer with AgXtra, a private agricultural consultancy and research firm, in Adelaide for the last 2 years, he is back home and working with Alex, Tristan, Clare and Keith and we’re all delighted to have him back.