If we wanted to reproduce an ideal growing season for chardonnay, we’d almost certainly use 2013/14 as the blueprint where just about everything worked in our favour. We had good rain during spring that fell at the right time, so there was no disruption to the flowering. Our management of the vineyard worked well and we avoided disease and bird damage and all of this combined to give us crop levels of slightly above average.

Most importantly, Mother Nature smiled on us, giving us literally day after day of good ripening conditions and the numbers tell the story. In the end, chardonnay enjoyed a luxurious 1046 hours between 18 and 28°C, when all it needs is 700 to ripen the crop. In addition, it received 29 hours above 33°C, enough to ensure consistent ripe fruit characters but way below our designated excess extreme heat level of 80 hours. All up, we picked some of the best Chardonnay fruit ever at 12.7° Baume on 20th February.

After this sort of a positive start, we dared not make any mistakes and set about carefully shepherding our new baby through the winemaking process.

The fruit was whole bunch pressed and the juice was captured and settled in stainless steel tanks for 48 hours.

The clear juice was racked off, with a light inclusion of solids and fermentation commenced in stainless steel, using pure yeast cultures. Once successfully under way the fermenting juice was then racked to barrel. All casks were 228 litre French oak and 43% of them were new. Moss Wood has 5 individual chardonnay vineyards, all of which ripen at slightly different times and so this wine typically starts its life as at least 3 individual batches. When they all finish fermentation, they are blended together and returned to barrel as a finished wine and this was carried out on 17th March 2015. Next, it underwent a full malolactic fermentation, whereupon it was racked once more, adjusted with tartaric acid and sulphur dioxide and returned to barrel.

It stayed in oak until 8th September 2015, giving the blended wine a total of 20 months. Fining was with bentonite for protein stability and then it was sterile filtered and bottled on 30th September, 2015.

The wine has a medium to deep straw colour and is in bright condition. The nose has the full complement of Moss Wood Chardonnay fruit aromas - limes, peaches, marmalade, roast almond and malt biscuit. The extended barrel age and malolactic fermentation has added in some toasty, spicy oak and interesting bread and caramel notes. Complex, indeed. The same themes continue on the palate, with full body and high acidity combining with peach, nut and cheese flavours, providing generosity and length. The finish has some toasty oak, with some tannin evident.

As usual for Moss Wood Chardonnay, it is a very drinkable youngster and can be enjoyed now. However, it is definitely a wine for the cellaring enthusiast and will begin to show some bottle development by 10 years of age. For those who like their chardonnays to mature to the point where the secondary characters are dominant, they should wait until the wine is at least 20 years old.

We had a generally excellent growing season and yet we began the 2013 vintage with a degree of fear and trepidation. This was not because of any quality concerns but rather, we’d had a monumental hail storm on 30th November, 2012, the likes of which we hadn’t seen since 1996 and we were worried just how small our yields were going to be. The thing is, it is possible to see the damage but we don’t know the true extent until we actually start picking.

The first of the Ribbon Vale reds to come off was the Cabernet Franc on 4th March and its yield was down by 30%, which wasn’t as bad as expected. When we started Merlot 8 days later, we hoped for the same and yes, we were in luck. That left Cabernet Sauvignon, which started on 27th March and sadly our hopes were dashed - its yield was down by just over 50%. Such is life in agriculture. What did matter was quality and that was very encouraging.

Despite the stormy conditions outlined above, the season was warm to hot, especially at the end of December where we had one day with a maximum of 40°C, the hottest day for the summer. January temperatures eased but things warmed again at the beginning of February, although not quite as hot as December. March delivered typical autumn weather, so all the varieties moved gently to full maturity, especially Cabernet Sauvignon.

Cabernet Franc was hand-picked and destemmed into a small, open tank, seeded with a pure yeast culture and allowed to ferment at up to 30°C and hand plunged 3 times per day. After 13 days it was pressed to stainless steel, underwent malolactic fermentation and was finally racked to barrel on 13th April, 2013. The casks were all 228 litre French oak. Merlot was hand-picked and destemmed into static fermenters, seeded with pure yeast culture and allowed to ferment up to 30°C and were pumped over 3 times per day. Skin contact time was 16 days, after which the wine was pressed to stainless steel. Malolactic fermentation was carried out by selected bacteria and after MLF the wine was racked to 228 litre French oak barrels on 23rd April, 2013.

Cabernet Sauvignon was hand harvested then separated into 2 batches. The first was destemmed into a small open fermenter, the second into a static fermenter and both were seeded with pure yeast culture. In the former, extraction was by hand plunging 3 times per day and in the latter by pumping over 3 times per day. The open tank stayed on skins for 17 days while the closed tank achieved its tannin balance a little sooner and was pressed after 14 days. After malolactic fermentation both batches were racked to barrels on 27th May, 2013. All barrels were 228 litre French oak and 8% were new.

It was then returned to barrel where it stayed until 14th September 2015 when, after 30 months aging, it was racked to stainless steel. Fining trials were carried out but none improved the wine, so it was left unfined and then sterile filtered and bottled on 1st October, 2015.

In a first for Ribbon Vale under the Mugford ownership, we now produce this flagship as Cabernet Sauvignon. The wine was blended on 12th January 2015 and is 92% Cabernet Sauvignon and 4% Cabernet Franc and 4% Merlot. After the blending it was returned to barrel till 14th September, 2015, 28 months in oak, when it was racked to stainless steel in preparation for bottling. The balance of the wine was excellent with no need for fining. It was sterile filtered and bottled on 2nd October, 2015. 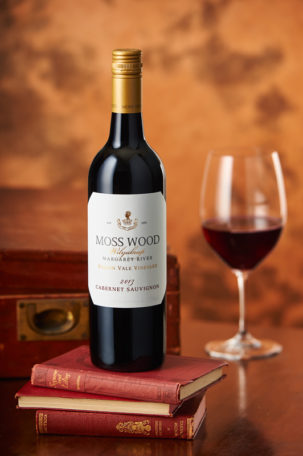 It has taken 14 vintages but the Mugfords are finally happy that they have got the Ribbon Vale vineyard where they want it to be and can release a varietal Cabernet Sauvignon as the premier wine from the property.

It has a deep brick red colour and is in bright condition. The nose is classic, almost oldfashioned Wilyabrup cabernet sauvignon, showing all the hallmarks of the region and taking us back to the future - we could almost be tasting a 1983. There are aromas of redcurrant, mulberry and blackberry with the typical background of a touch of eucalypt and tar and behind this is a touch of spicy, toasty oak. The palate is full bodied, with generous red and black fruits.

Whereas with the Merlot there is brightness and freshness, this wine has density and concentration. The tannins are firm and provide a long platform upon which the fruit flavours sit and yet the wine finishes with roundness and balance. When discussing a Wilyabrup cabernet sauvignon these days, it almost goes without saying this is a wine for the cellar.

Although it’s from the Ribbon Vale vineyard, it shares some of the style of Moss Wood 1983 and we have no doubt it will develop in a similar way and so proudly recommend it for a minimum aging time of 20 years. 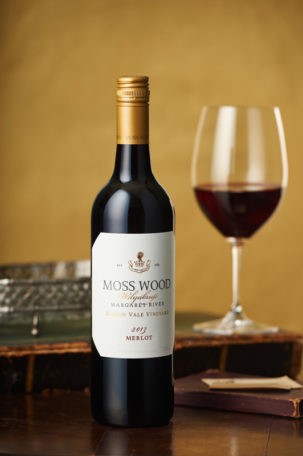 This wine has deep brick red colour and is in bright condition. The nose is a bright expression of Merlot fruit, combining blackcurrant, mulberry and toffee apple. It is also quite complex, with plenty of leather and tar in the background. A similar theme shows on the palate, with mouth-filling red and black fruits, sitting over full body and firm tannin. There is good length and the tannins are well balanced, with an astringency that gives a bituminous finish but doesn’t leave the mouth dry or gritty.

The brightness and balance mean this wine lends itself to early drinking and is really quite enjoyable now. However, it will certainly age well and we recommend it for at least 20 years cellaring. This will allow it to build its secondary notes of leather and tar, enhancing and rounding the palate with softer tannins. As excited as we are about the 2014 vintage, we have to admit the 2015 suffers little by comparison, except with respect to vineyard yields.

We had a very wet year, with rainfall around 20% above average and with significant dumps landing on us during the spring. Apart from the fact rain interferes with flowering, it’s often accompanied by cold weather. If the temperature drops below 80°C, that also causes the flowers to abort, so poor weather can be a double-edged sword. Such was the case in 2015 and yields all affected, with most varieties down by at least 50%. Not a good year for the bank manager!

As frustrating as low yields are, the key for us is wine quality and ‘15 delivered that in spades.

Temperatures were spookily similar in 2014 and 2015. Both seasons were typified by a succession of delightful summer days, warm but not hot and with just enough of the latter to allow the fruit to ripen evenly and with the best flavour. From a winemaking perspective, we just had to remain vigilant and monitor the increasing grape sugar levels and be prepared to pick when everything came together.

It all started on 12th February, when we picked Sauvignon Blanc at 11.6° Baume and followed it up 12 days later with the Semillon at 13.2° Baume. As an amusing aside, the yield on the latter was down 60%!

Both varieties are made using the same technique. The fruit is destemmed, chilled, pressed and then the juice is settled in stainless steel tanks. The clear juice is then racked to a new tank and seeded with a pure yeast culture for primary fermentation and once this is successfully underway, it is racked to old, 228 litre French oak barrels.

At the end of ferment, the two components were racked and blended and returned to barrel as a finished wine on 15th April, made up of 74% Sauvignon Blanc and 26% Semillon. The choice of old oak only is quite specific because our emphasis for this wine is fruit freshness. We do not want it to display wood character but rather to accrue the improved texture that comes with barrel fermentations.

Unlike our Chardonnay, this also means the wine doesn’t require extended barrel age and the blend was racked to stainless steel on 18th September, giving it around 6 months in oak. It was then fined with bentonite for protein stability and then sterile filtered and bottled on 29th September.

The Ribbon Vale 2015 Sauvignon Blanc Semillon has light to medium straw colour and is in bright condition.

The nose is essentially a bright, fresh combination of the two varieties. There are lots of leafy, gooseberry, grassy notes from the former and then soft lemon, fig and honey notes from the latter.

On the palate, the emphasis on freshness continues with light to medium body, high acidity and crisp, grassy fruit flavours. However, there is no assertiveness to the acidity, courtesy of the smoothness and generosity from the barrel fermentation.

The length is good and the finish is clean with no astringency. Made in this style, the wine is enjoyable from day one and we encourage people to consume it while young and fresh. However, this doesn’t mean the wine will not age well, especially with its Semillon component and we recommend cellaring for 5 years.