It’s hard to remember a better growing season for Pinot Noir than 2013/14. We had above average rainfall through the year but during the flowering period of 4 weeks that commenced at the end of October, 2013, there was no rain to speak of and temperatures remained moderate.

For readers who are not sure, flowering is the process whereby the grape berries form on the bunches and it’s very sensitive to the weather. Any significant rain, typically more than 5mm, washes the pollen off the recently opened flowers, meaning those individuals won’t set any fruit. Similarly, if the temperature drops below 8o C, any of the recently opened flowers will abort. Apart from being one of the most crucial times of the year in the vineyard, for the romantically minded it’s also very rewarding because vines have a very distinctive and attractive perfume and can be smelt quite clearly. In fact, vineyard managers can often smell that flowering has started before they actually see it.

The vines then enjoyed some 70mm of top up rain through to the end of December.

It’s one of the quirks of viticulture that we can have had such good conditions and still end up with yield of 4.43 tonnes/hectare, down some 30%. In fact this was not really a surprise because the vineyard was still recovering from the hail damage inflicted in November 2012. If we’re being honest, we’re happier with low yields in Pinot Noir because experience tells us quality can suffer with bigger crops.

Perhaps the final point to make about the quality of the season can be seen in the climate data below. The Pinot Noir basked in a succession of beautiful sunny days, accumulating 950 hours of ripening time between 18 - 28o C, when 700 is adequate. Similarly, it experienced only 23 hours above 33o C, so there was definitely no heat stress, although we wouldn’t like to see too much less than this. Vines actually benefit from higher temperatures and we think 30 – 40 hours is reliable for full flavour ripeness.

Ripeness was slightly above average at 13.8 Baume and the harvest date was 8 days earlier than average on the 14th February, 2014.

There were no disease problems and the birds were kept at bay by the nets so we had clean, hand-picked fruit delivered to the winey to give us a flying start in the winemaking process. There were 5 individual batches of Pinot Noir and all were destemmed into small, open fermenters and then hand plunged, 3 times per day, for extraction of colour and flavour. Fermentations proceeded at warmer temperatures around 28-30o C and were carried out by selected yeast strains. Like all areas of life, the advance of science and technology continues to give us an incredible array of tools to enhance the quality of what we do. For example, the choice of yeast strain used to be as simple as finding one that would reliably complete the fermentation and not give any off characters. My how things have changed. In 2016 we have a host of yeast strains to choose from to allow the natural process of fermentation to enhance all the different wines styles.

Grapes have naturally occurring yeasts that live on the skin of the berries, variously known as wild or indigenous, that will allow a fermentation to start spontaneously once the grapes are in the tanks. Typically, a natural, or spontaneous, fermentation, one in the same thing, will have several different yeast strains that combine to complete the job. They all bring a different character to both the nose and the palate, such that a successful wild yeast ferment will almost certainly make a more complex wine than one made from the same grapes with a pure single culture. This is why a wild fermentation is also sometimes called a spontaneous fermentation. In some cases, this would likely be considered better. However, there is considerable uncertainly with a wild yeast culture because it is not possible to know at the beginning whether it will be able to ferment the wine to dryness and also whether or not it may diminish quality by producing off characters like high volatile acidity, a smell reminiscent of nail polish remover and not one most people would enjoy in their wine.

If people are interested, at Moss Wood, we made 2 vintages using indigenous yeasts, 1999 and 2000 and it’s easy to see from their complexity the impact of the technique, especially when comparing them in a vertical tasting with the wines either side. Having given it a good try, we decided the technique was too risky and reverted to selected strains.

Winemakers have been searching for selected strains that allow us to achieve the positive aspects of wild ferments without the risk of damage and nowadays this is entirely possible. Commercial products exist that allow us to run fermentations using multiple yeasts, each bringing their own characters to the wine and we can confidently expect them to complete the job without harm. It’s a great balance.

How is this relevant to 2014 Moss Wood Pinot Noir?

While this variety has a wealth of interesting characters, these are just the scaffolding for the complete wine. Careful choice of yeast can really enhance the style by improving the complexity of the nose and texture of the palate. We have worked extensively on this since 2009 and believe that since then our wines have evolved new and interesting characters and the 2014 really expresses these and which we discuss in the Tasting Notes. Returning to production technique, after fermentation each batch was pressed and underwent malolactic fermentation in stainless steel. Upon completion it was then racked into 228 litre French oak barrels, 15% of which were new, where it stayed for 18 months. In September 2015 all barrels were racked and blended in stainless steel and the wine was assessed for balance. It was decided fining was not required.

It was then sterile filtered and bottled on 14th October, 2015. 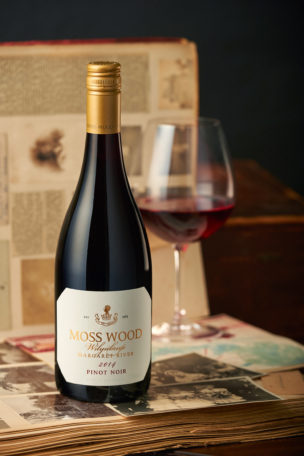 Elapsed Between Flowering and Harvest:
101 days

Colour and condition:
The wine has a medium to deep ruby hue and is in bright condition.

Palate:
Bright strawberry and cherry flavours fill the mouth and sit over a balanced structure of lifted acidity and firm tannin. The mouthfeel is medium to full-bodied and the wine has intensity without heaviness. The tannins are supple and provide a good base for the flavours and body of the wine without impinging on the texture, avoiding drying or grittiness.

Cellaring:
No doubt about it, with its appealing fruit notes, spiciness and balance, the wine is very enjoyable to drink now. However, we encourage those who have the space and the patience to give this wine long term cellaring. It will take at least 5 years for the secondary notes to evolve but at least 10 for them to play a major part in the wine. This means our minimum cellaring recommendation is for a decade, although full maturity will take at least 20 years. We say this with great confidence as our first vintage of this wine was 1977 and we try and enjoy the wines from the intervening vintages often. With our customers, of course.