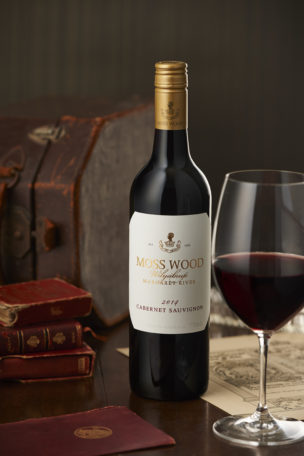 Days Elaspsed Between Flowering and Harvest

We introduce our Moss Wood 2014 Cabernet Sauvignon by talking about the weather, as the best way to highlight how good the vintage was. Yes, we always emphasise the weather and regular readers know our strongly held view that the quality of any vintage is largely the product of the vineyard and the growing season it experienced.

As much as technology ensures we minimise the downside of poor weather or human error, ultimately, the quality we deliver in the bottle is almost entirely down  to  Mother Nature.

It’s an amusing truism that farmers complain about the weather and we grapegrower cockies are no different, watching it closely and fretting about what it will bring.  Of course, there’s nothing we can do about it but we can respond to varying conditions and do our best to shepherd the  crop safely to harvest. In reality, even in a tough season, the weather makes our lives interesting in a positive way. It seems contradictory but the more difficult the conditions, the more professionally challenging and satisfying the process can be, especially when we make really good wine, with 1989 a shining example.

And then there’s 2014. From the time the vines went through budburst until the grapes were harvested 6 months later, the weather was entirely in our favour. It’s hard to know where to begin.

We had above average rainfall through 2013 but most of it fell at times that caused minimum disruption. In our dry grown vineyards, this is always a bonus. It’s probably churlish to note the Cabernet Sauvignon and Cabernet Franc yields were very slightly down (about 4%), which we suspect was the result of 4 wet days during flowering. Petit Verdot, which flowered slightly later, wasn’t affected.

Temperatures were ideal, with consistent mild to warm conditions and virtually no extreme heat. The mercury exceeded 40°C on only one day, 11th January, lasting for 45 minutes and across the whole season, there were a total of 36 hours above 33°C, almost a little too cool for Cabernet Sauvignon, where we’d prefer more like 50 hours, just to be on the safe side. Most importantly, the vines do their best work when the temperature remains in the mid-twenties and they basked for hours in those conditions.

Our role was essentially reduced to that of bystanders but we’re proud to report we succeeded in avoiding disease and stopped the birds with timely application of nets.

With such good conditions, the Cabernet Sauvignon strolled effortlessly across the finishing line of full ripeness on 16th March, 10 days ahead of average.

All this good news meant we were under pressure to deliver in the winery and 2014 is truly a “no excuses” year.

We have been repeating this statement for 45 vintages but will say it again, with feeling.  We applied the now traditional Moss Wood production  technique of hand picking all the fruit, destemming it into small, open fermenters and establishing fermentation with pure yeast cultures. Once underway, each batch was hand plunged 3 times per day and left on skins for between 16 and 19 days, according to taste, then drained and pressed to a stainless steel tank. Through April 2014, each of the batches underwent malolactic fermentation, and upon completion, were racked to wood. All barrels were French oak barriques and 17% were new.

At the beginning of November 2016, the wine was racked from barrels and blended in preparation for bottling. The blend is 92% Cabernet Sauvignon, 4% Cabernet Franc and 4% Petit Verdot. Fining trials were carried out but none improved the wine, so it remained unfined. It was then sterile filtered and bottled on 21st November, 2016.

The colour is deep brick red and condition is bright. On the nose the wine displays the full range of Cabernet fruit aromas – blueberries, blackberries and red currants, plus lifted perfumes of violets and pomegranate. As pretty as these characters are, underneath there are layers of leather, cedar and tar reminiscent of years like 1975 and 1995, adding significant complexity.

The palate is similarly a rich expression of Cabernet Sauvignon, with the full array of ripe mulberries and cassis, giving rich fruit depth and length. The structure is very supple and sits underneath this generous fruit. The acidity gives the flavours vibrancy and the tannin is concentrated but rounded, so the effect is one of smoothness and length. The finish is soft oak, leather and tar.

We can’t help but feel with this wine we have made a true rival for 2001 and 2005. It is not exactly the same as those two, having slightly lower alcohol and with that more vibrant fruit lift, but this is splitting hairs. Like those two wines, the depth, balance and length point to long aging potential but in the short  term, we are more than happy to recommend it for early drinking, to enjoy its youthful generosity.  However, this wine will repay serious cellaring and develop to full bottle bouquet at around 20 to 25 years of age. After that, it will continue to provide enjoyable drinking until at least 40 years of age.

Mother Nature’s mood during the 2016/17 growing season can best be described as languid and rarely has she raised her voice in anger. We had plentiful rain through 2016 and yet any that fell during Spring did little to disrupt flowering and wind and hail were noticeable by their absence.

She gave us some moments of concern when stormy weather loomed several times through February and March. In particular, on 10th February, we were a bit uneasy when the Bureau of Meteorology forecast 100mm of rain for our region but in the end, on each occasion she very graciously took the wet weather around us. Talk about lucky!

Temperatures have been mild, with our hottest day being 4th January, when the mercury reached 36.70 C. These conditions were perhaps not quite what our beach-going visitors were hoping for but the vines reveled in them and both Moss Wood and Ribbon Vale have rarely looked better.

At the time of writing, Pinot Noir, which got us underway on 4th March, and Sauvignon Blanc are both safely in the winery, both slightly up in yield and about 10 days later than average.

It might be asking a bit too much but if Mother Nature could indulge us with a classic, West Coast Indian Summer, we may just produce one of our very finest Cabernet Sauvignons. We are looking at a very similar vintage to 1990 and it would be a thrill
to make another one like that

Waiting patiently for the vines to complete their
work is the 2017 vintage team. This year it has both
an international and a local flavour. Assisting Clare, Keith, Alex and Gina, from USA, Ben Diaz and Devon Miller, from UK, Victoria
Smith and from Melbourne we have Niles Sheridan. Ben and Devon were introduced by Nico Cueva of Koster Browne, in the Sonoma Valley, California, who was on our 2010 crew. His stories
apparently didn’t put them off!

Ben, a San Diego native, is a Bachelor of Arts from San
Francisco State University, where his major was Cinema
and his particular interest animation. He came to wine
as student while working at Barrique Wine Bar in San
Francisco and through the owners, the Weese brothers, got the chance to expand his knowledge. This lead to him working the 2016 vintage at KB, as we now refer to it. We’ve never had an animator at Moss Wood and Keith is trying to get Ben to keep a
vintage sketch book.

Devon, a Texan who took up climbing and moved to Colorado to be in the Rocky Mountains, worked in The Kitchen restaurant in Denver, eventually becoming the wine buyer. This gave her contact with the Californian industry and led to her completing the 2016 vintage at Wind Gap Wines in Sonoma. Dev is keen on “natural wine”, leading to some interesting discussions
with Keith. To her credit, she listens politely and lets the
tirade wash over her.

Victoria is a Bachelor of Arts from the University of Aberystwyth in Wales, with a major in Languages specifically Italian and Spanish. Her wine interest sparked while living in Italy. Returning to Britain,
she joined the management training scheme run by retailer Majestic Wine. A holder of the WSET Level 3 wine qualification, she is focusing on the production side of the business, with a
view to staying in Australia to study winemaking. Keith is
continuously reminded of the limerick, “There was a young
girl from Aberystwyth” but is too polite to say it.

Niles, a man of the Melbourne food and wine
scene, completed a Bachelor of Business at La Trobe
University, majoring in Marketing and Hospitality. His wine experience is varied and includes sales with the legendary retailer and Hawthorn nut, Phil Hude, from Armadale Cellars and 3 vintages on the Mornington Peninsula with Ruth and George Mihaly at Paradigm Hill, amongst others. Niles, a keen AFL player, is buying into the local life by training with the local Dunsborough “Muelies” side, alongside Alex Coultas.