Readers who’ve been following the Moss Wood releases over the last year or so will have noted our enthusiastic commentary
about the 2016 vintage so there will be no surprise we now report with similar excitement about the Ribbon Vale reds. There is much to like about them.

Initially the season behaved quite normally. Rainfall had
been very close to average, so there was plenty of moisture in the soil and our dry grown vineyards had as good a start as we can hope for. Temperatures were warm enough during spring to encourage an early flowering with Cabernet Sauvignon being a week ahead of normal and Cabernet Franc and Merlot 2 weeks. Of course, the Laws of Maximum Inconvenience were operating as normal because warmer conditions weren’t available when we needed them during flowering and all 3 varieties suffered from the wet and cold conditions that moved through Wilyabrup in the last week of October. As a consequence, yields were down for each – Cabernet Sauvignon by 40%, Cabernet Franc by 36% and Merlot by 45%.

Things settled down after this until the much-discussed big rain in mid-January threw a spanner in the works. As with the other varieties, the Ribbon Vale reds were all still green enough not to be affected by splitting and rot. After this, normal transmission resumed and we kept disease and birds at bay to have a healthy crop ready to harvest in early March.

There is one thing we can’t quite explain. In the end, despite flowering 2 weeks early, Merlot ripened effectively one week later than average, on 24th March, meaning it had taken 139 days to go from flowering to harvest, 3 weeks longer than average. Not that we fuss too much about these things but statistically, this is extremely unusual and we’re at a loss to come up with a clear explanation. The most obvious is Merlot reacted more than the other varieties to the January rain but this would normally manifest itself as a significant, upward yield fluctuation but as we can see above, the opposite happened and the bunches were around 10% lighter than average. Just when we think we’ve seen it all, Mother Nature throws a curve ball. We’ll have to dig a little deeper to try and learn more.

Returning to the point, each variety sailed comfortably through to full ripeness and fruit quality and flavour were excellent. A notable point for 2016 is flavour ripeness was achieved at slightly lower sugar levels, meaning the finished wines display good fruit intensity with more elegance on the palate, courtesy of the accompanying lower alcohols. Each variety was picked by hand, Cabernet Franc at 13.5° Baume on 12th March, Merlot at 12.9° Baume on 24th March and Cabernet Sauvignon at 13.3° Baume on 23rd March.

All 3 varieties were destemmed and sorted to remove any contaminating leaves and stems and Cabernet Sauvignon and Cabernet Franc were then placed into small, open fermenters. Merlot was transferred into small, closed fermenters. The reason for the variation is we have greater success in extracting Merlot’s colour and tannin in vessels that can be pumped over, not plunged. The reasons are not clear, other than to say if there’s a variety that will be different, it’s Merlot!

Fermentation for all was with multiple yeast strains, and each batch was handplunged, or pumped over, 3 times per day and tasted daily to monitor tannin balance. Cabernet Franc was pressed after 9 days, Merlot after 14 days and Cabernet Sauvignon after 16 days. It was another noticeable feature of 2016 that all 3 reached good tannin balance relatively quickly compared to previous years and spent less time on skins.

After pressing each batch underwent malolactic fermentation in stainless steel and once completed, they were adjusted for acidity and SO2 and racked to barrel through March and April 2016.
All barrels were 228 litre French oak. For the Cabernet Sauvignon, 14% were new and for the Merlot it was 6%.

After blending in stainless steel, the finished wines were racked back to barrel where they stayed until the second week of June 2018. After blending for the final time, fining trials were carried out and the Cabernet Sauvignon remained unfined but the Merlot tannin balance was improved with a light egg white fining. Both wines were then sterile filtered and bottled on 9th August, 2018. 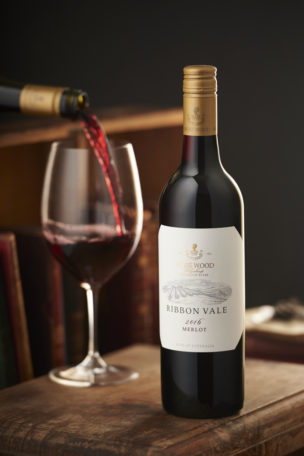 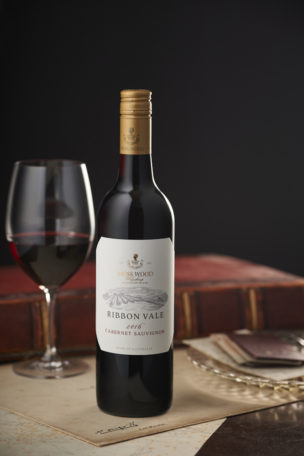 Ripening Time from Flowering to Harvest: The hue is deep, brick red. Condition is bright.

In line with such a good vintage, the first impression is all about berry fruits – blackberry, mulberry and red currant, sitting over the usual Ribbon Vale vineyard stamp which we think of as leather and eucalypt.

This is not to say the wine is simple but rather there is a bright, buoyant note to the aromas, as each of the varieties in the blend signal their presence. Long term barrel age has built in tarry characters and a very light touch of toasty oak, ensuring the typical Cabernet Sauvignon complexities.

Similarly, the fruit flavours reveal themselves, filling the front and mid-palate with lots of berries and dark jubes. A firm structure sits underneath, with acidity that brightens the flavours, plus Ribbon Vale’s dense tannin providing a concentrated platform on the finish. The oak is light touch right at the end.

It is amusing to write about a Cabernet Sauvignon wine as having such prettiness but this signals the volume of fruit it retains and this, combined with the complexity and structure, will see it cellar very well. For those wanting to see some bottle development, we recommend a minimum of 10 years but full maturity will require at least another decade of aging beyond that. The hue is medium-to-deep brick red and condition is bright.

All good Merlot wines have a strong black fruit statement and the aromas on the 2016 Merlot are right in that mould. There is an array of rich blackberry, blueberry and cherry notes and as with its Cabernet Sauvignon sibling, they dominate. Sitting very much in the background at the moment are the beginnings of Merlot’s earthy tones, with just a touch of leather and tar.

Here there is immediate impact from rich dark fruits, making the mouthfeel supple and generous. Given this variety can produce assertive tannins, we’re really proud the structure of the wine is much better balanced, with firm phenolics that have good tarry concentration but none of the drying astringency that can be typical in Merlot.
Rather, the dark fruit flavours flow across the palate and then the tannin and oak on the finish give just enough firmness and some pencil shavings notes. Readers of the West Australian or viewers of ABC are likely aware Moss Wood found itself in the news during September, although not for the reasons we like. Unfortunately, we had a frost on the morning of 15th September, a roughly once in a decade occurrence.
People may ask, how is it possible to have a frost in the strongly maritime climate of Margaret River? The answer lies in the topography of the Moss Wood vineyard. We are situated in an east-facing valley and on a clear, still night, the cold air drains away down the hill. However, at the bottom of our slope, where our Old Block Chardonnay and Old Block Cabernet Sauvignon are planted, there is a low-lying basin where the cold air will collect. If we have an especially cold night, as we did on the 15th, the temperature in that section can drop to freezing, or below.
Since 1969, the year our first vines went in, we have had spring frosts in 1981, 1982, 1987, 2017 and now 2018. Of these, only 1981 and 2018 did serious damage, although we mitigated the impact of the 1982 event by lighting frost pots in the vineyard. In fact, 1981 was by far the worst because it came in late October, when all the varieties had significant shoot growth and the losses in the Old Block Chardonnay and Old Block Cabernet Sauvignon ran to over 90%. We are relieved not to have had a repeat of that.
This year, only the Old Block Chardonnay had any significant growth and was therefore the only part of the vineyard to sustain any damage. At this stage, it looks as though it has lost at least half of the crop, which is actually better than first thought. The painful part is these old vines typically produce our best parcel of Chardonnay fruit.