For people who know Moss Wood well, some may recall the very good 1990 vintage, one of the very few which was outstanding for all varieties but also good across all regions in Australia.
There were great wines made right around the country.
Our experience tells us if we wait long enough, we’re bound to see a similar vintage in the future and it turns out 2017 is the one, at least for Moss Wood. It’s amusing how closely 1990 and 2017 align, although, of course, they’re not
exactly the same.

The growing season was excellent, if somewhat cool. Rainfall in calendar year 2016 was 25% above average, at 1,248mm and so there was plenty of moisture in the soil of our unirrigated vineyards. In a divergence from 1990, with the Spring rain came some inclement conditions through October and November. At times, we had windy and cold weather and even some small hail.As a result, the Chardonnay yield of 6.15 tonnes per hectare was down by around 10% and notably lower than 1990’s 7.44 tonnes per hectare.

Most of the lower yield was the product of fewer bunches, not surprising given the conditions, which at 29 bunches per vine, was down by 20%. The vines did their best to recover some of this because the weight was up ever so slightly to 99 grams per bunch, compared with the average of 95. We had a run of slightly warmer, dry days at the end of November that provided better flowering conditions.

Generally mild temperatures and occasional rain remained the theme of the vintage from then on. After flowering, the vineyard received a further 43mm of rain up until the Chardonnay harvest, none of which did any harm because the vines were accustomed to it and our fungicide program controlled any disease. A fascinating coincidence was not only did the rain events occur on essentially the same dates as 1990 but also the same amounts fell. There’s very little we can read into this other than to say it was very amusing to watch it unfold.

More importantly, the average temperature for the season was quite mild. For comparison’s sake, the 18.7°C of 2017 was notably cooler than the more typical 20.1°C of 2016.

Naturally enough, all the phenological stages were late. Median flowering date was 19th November compared with the average of 5th and median harvest date was 21st March compared with 1st March. The time elapsed between flowering and harvest of 121 days is 8 days longer than the average of 113. Despite things being mild, the vines enjoyed 1124 hours in their preferred temperature range of 18-28°C, so the fruit achieved full sugar and flavour ripeness. Harvest Baume was spot on the average of 13.1°. For the record, the hottest day of the Summer was 37°C on 4th January and in total, the vines received 34 hours above 33°C, enough serious heat to make sure there were no green characters.

Everything came together on 21st March when this sound
fruit was hand picked and delivered to the winery, where
it was sorted then wholebunch pressed. After settling in stainless steel, the clear juice was racked and seeded for fermentation. These days we use multiple yeasts, acknowledging the complexity they bring to the wine, without the inherent quality risks of off odours and stuck fermentations associated with using wild yeasts.

As a brief explanation as to the impact on the Moss Wood Chardonnay style, the yeasts essentially bring two components to a wine. On the nose, the nearsubliminal complex aromas, usually described as earthy, akin to mushroom and truffle, occasionally presenting as more obvious sulphide-derived compounds. We prefer former, of course. On the palate, they enhance a wine’s mouthfeel by producing more glycerol, although this effect
can really only be noticed when the alcohol is below 12%.

Once primary fermentation was underway, the juice was racked to 228 litre French oak barrels, of which 48% were new and this was followed by a full malolactic fermentation. At this point, all the barrels were combined and the blended wine was returned to oak, where it stayed for a total of 16 months.

At the end of July 2018, the wine was racked and blended
in stainless steel in preparation for bottling. Fining trials were carried out and after tasting it was decided to fine only with
bentonite for protein stability. The wine was then sterile filtered and bottled on 10th August, 2018.

Medium to deep straw hue, with green tints and in bright
condition.

Very generous Chardonnay stone fruit-like aromas of
peaches and nectarines, combined with the typical Moss Wood complexities of orange marmalade, honey, caramel and roast almonds. The near 50% new barrels have given a lightly toasty background.

Here the wine replays the combinations of the nose, with stone fruits, oranges and caramels combining to give a rich but lively feel. This length and depth of flavour is underpinned by crisp acidity and a well-hidden but firm tannin, ensuring the right sort of structure for good cellaring.

As we at Moss Wood have tasted this wine over its time in the cellar, there has been a strong consensus that this is the best Chardonnay we’ve made. The combination of fruit depth, complexity and structure is one we wish we could get every year. This means it has the sort of youthful fruit and generosity that will very likely encourage consumers to glug it down while young. However, it has the spine to develop well and age for the long term and we recommend keeping it for at least 10 years to see some development but 20 years for full maturity. Number of hours accrued between 18 and 28⁰C:

Number of hours above 33⁰C : Mother Nature was in a generally benign mood for
most of the 2015/16 growing season but she chose to test us with some well-timed, or perhaps we should call them challenging, rains. Overall, rainfall had been reasonably plentiful for 2015, albeit very slightly below average (4%) at 959mm, so the vineyard was well enough watered and we were generally pleased with our weed control.

Flowering conditions weren’t perfect, with 2 cold, wet days right in the middle of the Pinot Noir process. However, the real challenge came when she blessed us with 106mm of rain on 18th January. Wet weather at that time of year is not unheard of in Margaret River but the probabilities are relatively low, with the last event on that scale being in January 2000. Sometimes we get lucky because the timing meant the berries had only just begun to soften. Had the rain come a week later, the risk of splitting and therefore disease would have been much greater. We were very relieved!

Beyond this, the season was typical. Flowering was on 2nd November, roughly one week ahead of average and the picking date of 10th February, gave a season length of 99 days, 2 days faster than normal. We suspect this was because the vines had a bit less ripening work to do, with the crop level of 4.43 tonnes/ ha being 30% lower than average.

At harvest time, the technique was classic Moss Wood. The fruit was hand harvested, destemmed, apart from an inclusion of 5%
whole bunches and placed into small, open fermenters. The must was chilled to 8°C and allowed to soak for 48 hours, after which it warmed to ambient temperature and was seeded for fermentation with multiple yeast strains. All tanks were hand-plunged 3 times per day. Each batch was tasted daily to monitor tannin extraction and balance and pressed after 18 days on skins.

After pressing, each batch underwent malolactic fermentation in stainless steel and they were then racked to wood in the second week of March 2016. All barrels were 228 litre French oak barriques, and 17% were new.

On 3rd November, 2017, all the barrels were racked to stainless steel and fining trials were conducted on the final blend. In what is a very rare thing, we decided the wine was improved using a
very small dose of gelatin, making it the first and only Moss Wood Pinot Noir treated with that agent. It was sterile filtered and bottled on 13th November, 2017.

Medium to deep ruby hue and in bright condition.

An initial, bright statement of strawberries, strawberry jam, cherry and cinnamonlike spices. Behind this a background of ground cumin, mushroom and tar, with a very fine note of toasty oak.

The theme of brightness and lift continues with generous strawberry and cherry filling the front and then the spices and oak providing the finish. The structure is firm but in balance, with acid and tannin well covered by medium to full bodied mouthfeel combining with fruit and oak flavours to give a seamless feel.

As is typical with our Pinot Noir wines, the 2016 has generous fruit flavours that are immediately enjoyable, so it is delicious if drunk now. Nevertheless, it has the necessary complexity and structure sitting underneath to keep it going for decades. To allow the wine to show some bottle age, we recommend cellaring for a minimum of 10 years while full maturity should be reached around 20 years of age. 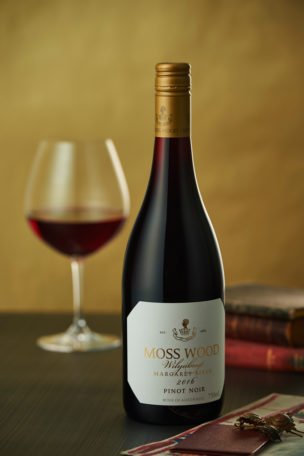 Number of hours accrued between 18 and 28⁰C

Number of hours above 33⁰C:

Days Elapsed Between Flowering and Harvest: The Cowaramup Turtles and Quality Control at Moss Wood

In this era where cycling has become a mainstream sport, the Cowaramup Turtle Brigade are proud to set a new low in the standard
of performance bicycle riding.
Led from the front by their 3 originals, Neil Earl, Max Montgomery and Keith Mugford, we hope readers will be delighted but
not surprised to learn, the Turtles have broken the mould when it comes to post-riding relaxation and recovery. Coffee is explicitly
forbidden and instead, after a challenging, afternoon ride, a glass of wine is the beverage of choice.
Not all the Turtles are from the wine industry but those who aren’t have taken to wine tasting like ducks to water. So much so, they
now consider themselves to be a very discerning bunch who perform an important service for both Moss Wood and its customers.
Prior to release, each new wine is presented for assessment by these hard but fair judges. Opinions, of which there are many, are
shared and Keith is advised as to whether the product is ready for sale. Readers will be delighted (and relieved) to know that both the
2017 Chardonnay and 2016 Pinot Noir have received their ticks of approval.

The Uncertainties of the Modern World

Moss Wood Members may have noted and are perhaps relieved, that we have been through a period of radio silence.
Contact from us has been limited over the last 6 months and stems largely from the changes required by the new EU Privacy Laws.
Although Moss Wood has only a small percentage of members living in that region, we still felt compelled to comply and this proved
to be something of a challenge for a little Mum-and-Dad show in Margaret River.
However, we have put all this behind us and are now back in the swing of things and over the next 4 weeks we will be contacting our
Members with details of the release of the 2016 Moss Wood Ribbon Vale Cabernet Sauvignon, 2016 Moss Wood Ribbon Vale Merlot,
2018 Moss Wood Semillon, 2018 Moss Wood Ribbon Vale Sauvignon Blanc Semillon and finally 2017 Moss Wood Amy’s wines.