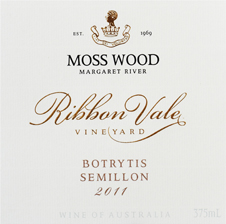 Nose: The first impression is of bright fruit aromas consisting of pear, nashi fruit and dried apricots and all are surprisingly fresh for a wine that has spent nearly two years aging in barrel. The oak itself does not play a big role in the nose and the characters are restricted to delicate, toasty notes. However, there are all sorts of interesting background notes coming from the noble rot, not the least of which is a distinct Disprin character.

The palate is initially bright and fresh, with jesty acidity and citrus notes which quickly give way to full body and creamy texture. It is luscious and generous but not cloying. It also has good length, with pear, fig and dried apricot flavours lining up along the palate and finishing with soft tannin.

It was probably inevitable this would happen - the increasing interest of the Mugford children would eventually force Clare and Keith to give in and do something exciting.

Keith blames the Mugford 2010 Christmas lunch where the pudding was accompanied by a bottle of 2003 Chateau d’Yquem and as usual with this great wine, people were reduced to using words like delicious, stunning and so on. This was a rare privilege and everyone was suitably impressed. As is so often the case, the experience of a truly great wine for the first time is something of a defining moment, likely to stay in the memory forever.

With the Yquem-driven inspiration, the end of the 2011 vintage saw considerable pressure brought to bear by Tristan and Hugh, both of whom were working at Moss Wood, to attempt our first Moss Wood botrytis wine. Clare and Keith relented, three rows of Ribbon Vale Semillon were set aside and we waited to see what might happen. Although Moss Wood has never produced sweet wines, as wine consumers we’ve always been very fond of the best dessert styles from all round the world. We include in that category, by the way, DeBortoli Noble One, which is the benchmark in Australia and has been a consistent, stand-out wine since its first vintage in 1982. We felt if we could get the right sort of conditions, even with our lack of experience, we might be able to make a good fist of it.

The first lesson for the Moss Wood beginners was that in making a “noble rot” wine we were even more exposed to the whims of Mother Nature than usual. Unless the rain falls at the right time and the temperatures are in the correct range, Botrytis cinerea may not take hold at all, or if it does, it may turn to smelly, grey mould, with no chance of making anything decent. And there is absolutely nothing that can be done about it. We can accept some agricultural risk but this bordered on the ridiculous!

The second lesson was the value of patience. We had a bit of luck, the weather remained cool and not too damp and sure enough, we found a gradual emergence of the right fungi and most importantly of all, the berries actually tasted good. By the end of April, we had a significant level of infection, flavours were promising and so we turned our attention to the weather. Margaret River region is not known for light showers during the autumn and heavy rain was now a threat to quality.

Significant showers came through during the first week of May and then the weather fined up. The fruit continued to taste good, although its appearance began to deteriorate. We felt that any more could seriously diminish the quality and decided to pick just before the next lot of showers. Rain loomed in the last week of May, so we “pulled the trigger” and picked on 26th. Our best estimate is that 60% of the berries were infected with Botrytis cinerea and this reduced the yield by 40%. The ripeness was 19.6⁰ Baume.

The next step for the beginners was to process this weird looking stuff in the winery and we have to admit that it was all a bit weird, getting the grape processing equipment out again some two months after we had cleaned it all up and put it away. Into the press went very shrivelled bunches, some of which made us wonder if any juice would come out at all. Once the press built up pressure, we started to get some deep golden juice and a quick taste confirmed all was well. We settled out the solids for 2 days and then racked the clear juice into a tank to seed it for fermentation.

Just what the yeast thought when they were dumped into this treacle-like substance is anyone’s guess but it was clear from the beginning that they didn’t much it enjoy it and were very slow to start. Once the fermentation got going, we racked the wine into barrels and waited to see what would happen. The rate of fermentation was never very high but as the alcohol level approached 7% it slowed even more. It continued to struggle along but eventually the combination of high sugar levels and alcohol were just too much for the organism and it was finally overwhelmed and stopped at 12% alcohol and 7⁰ Baume sweetness. It is quite literally a natural sweet wine. After fermentation ceased, we racked the barrels to make the blend consistent, adjusted sulphur dioxide, returned the wine to oak on 28th June 2011 and waited to see what would happen. Our plan was to leave it there for as long as it showed improvement. As things turned out, the improvement process went on for longer than we thought and the wine stayed in barrel until 29th January 2013.

Once back in stainless steel we decided yes, we did indeed have a wine good enough to carry the Moss Wood banner and carried out some fining trials to see if we could fine tune the flavours. In the end we gave the wine a light fining with skim milk to smooth the palate and then the wine was bottled on 8th February 2013.

Without wishing to overstate it, this combination of freshness and richness makes the wine very enjoyable now. There has probably not been a more drinkable Moss Wood wine at time of release, except perhaps for the 1985 vintage port. This is not to suggest the wine will not improve with age. On the contrary, its youthful colour and fruit characters and complexity will lend themselves to improvement through long term cellaring. However, this is our first attempt and we prefer be conservative about the wine’s aging potential. Therefore we recommend 5 to 7 years in the cellar, anticipating the nose will add caramel, toast and nutty notes to the bouquet while the palate will see a softening of acidity and tannin, improving the sweetness mouthfeel and therefore drinkability of the palate.