In 2017, Margaret River has been in the grip of nostalgia, celebrating the 50th anniversary of the planting of Vasse Felix, the first commercial vineyard in the modern era.
For Moss Wood, 2017 is the 40th birthday of Moss Wood Semillon. Please indulge us while we reflect on the life of our unsung variety.
It started with the original and brave decision by the Pannells to ignore Riesling, the dominant white wine of the time, and instead plant Semillon. It was intuitive thinking that proved correct. With time is has become clear Dr. John Gladstones’ prediction that Margaret River’s climate would be suitable for the Bordeaux varieties was correct. Yes, Cabernet Sauvignon has been the poster child but Semillon has done just as well.
The first vintage hinted at what was to come. In 1976, the Pannells made a tiny batch of Semillon and experimented with barrel fermentation and aging. They were happy with the result but felt the wood impacted too much and decided since it didn’t quite meet the required quality standard, it couldn’t be sold. Nevertheless, they were happy for people to try the wine and many experienced tasters were impressed. One fan, the Governor of Western Australia, Sir Wallace Kyle, convinced the Pannells to supply the wine to Government House for a dinner in honour of the visit by Queen Elizabeth 2nd during the Silver Jubilee Tour of 1977. For the fledgling Margaret River industry and for Moss Wood in particular, it was a huge thrill.
In 1977, the first commercial Semillon was made with classic Hunter Valley technique, still used today, with no barrel treatment. As with the 1976, the ’77 also turned heads and not only experienced tasters. A final year Oenology student at Roseworthy College named Keith Mugford had heard of the exciting new region of Margaret River but had never tasted any wines. This was until a dinner in 1978 with two Western Australian colleagues, John Elliott of the Western Australian Dept. of Agriculture and Dr Michael Peterkin, now the famous owner and winemaker of Pierro. John brought a bottle of the Moss Wood 1977 Semillon. Keith was really impressed and noted he should look out for Moss Wood wines in the future. In a remarkable coincidence, later that year he was offered the chance to work there.
With these and many other stories, Semillon is close to our hearts. It grows like a weed, ripens reliably and produces wines that are lively and vibrant in their youth but cellar for decades – a true, unsung hero. Reviewing the 2016/17 growing season, the notable feature is how mild it was. The vines set a very leisurely pace and went through flowering on 29th November, 8 days slower than average.

Rain was also a regular part of our lives. At 1248mm, rainfall for 2016 was way above our 1000mm average. During the flowering period, we received 44mm and there were10 days when temp dropped below 8⁰C. Not ideal conditions and probably responsible for yield of 6.48 tonnes per hectare, 36% down.

As much as we worry about rain damage, especially late in the season when the grapes have softened, in a year like 16/17, when precipitation is common, the vines become accustomed to it and there is less risk of rot. As the season progressed, we took comfort from this, especially as the showers just kept on coming.

Even old hands get nervous as the picking date looms and our confidence was tested in March as 60mm fell through the first 3 weeks. The Semillon was ripe at that point, so as soon as the rain cleared, off it came on 23rd March, 114 days after flowering, 7 days longer than the mean. For those who are good at maths, you can see, therefore, the harvest date was 2 weeks later than usual. Ripeness was spot on the average of 12.5⁰ Baume.

The wine has medium straw colour, with some green tints and its condition is bright. On the nose it is ethereal, with lifted perfumes of lemon sherbet, green apples, honey suckle and figs. Underneath there is just some early suggestions of the variety’s complex features like lanolin and mushroom. We always expect our Semillon to be relatively firm as a youngster and this wine certainly has good acidity and tannin. However, the fruit flavours of limes, figs and lychees are rich, generous and mouth-filling, so the wine displays softness and drinkability only seen in the great years.

The fruit was hand-picked, whole bunch pressed and the juice was settled in stainless steel for 48 hours.  The clear juice was then racked to stainless steel, where it was fermented using multiple yeast strains, with the temperature controlled at 18⁰C.  After fermentation the finished wine was racked off lees, fined with bentonite for protein stability, then sterile filtered and bottled on 11th July, 2017.

At Moss Wood we liken 2017 to 1990, one of our very finest.  They are remarkably similar.  This being the case, and knowing how well the ’90 aged, we have very high cellaring expectations of the new one.  It will require at least a decade to build some of the bottle bouquet of toast and butter and it will be a further decade before it is fully mature.  Beyond that the wine will continue to develop and should cellar until at least 30 years old. The 2017 season was long and mild for Ribbon Vale and the Sauvignon Blanc and Semillon were both entirely unhurried. Flowering was occurred on 4th December and 27th November, respectively, both 10 days later than average.

The wet, cool conditions impacted on Semillon yield, which was down 13% to 10.05 tonnes per hectare. However, on a happier note, the Sauvignon Blanc flowered late enough to miss the worst of the rain and its yield was an excellent 13.1 tonnes per hectare, up by 22%. What a pleasant surprise!

Full ripeness was a while in coming. Sauvignon Blanc came off at 11.6⁰ Baume on 9th March, two weeks later than average and the Semillon was picked at 13.2⁰ Baume on 1st April, spot on the average but 16 days later than usual.

We had some moments fretting about rot in the Sauvignon Blanc. It has a very tight bunch, making it the most susceptible variety we grow, but we are delighted to report our spray program worked, with virtually no infection and any that was there was removed by sorting at the winery.

The wine has a light straw colour with green tints and is in bright condition. Immediately one noses the glass, there is an impact of Sauvignon Blanc zesty notes – grass, leaf and passionfruit, in fact almost musky and Gewurztraminer–like, bolstered by lemon sherbet from the Semillon. When describing the Moss Wood Semillon, we emphasised the sheer quality of 2017 and this thread runs through the Sauvignon Blanc Semillon as well. The depth of fruit on the palate is tremendous and while the wine has the classic, acid freshness of the style, the high quality vintage has given it a generosity and length we don’t often see.

For both varieties, the fruit was hand-picked and whole bunch pressed, and the juice was settled in stainless steel tanks. The clear juice was then racked to stainless steel and seeded with multiple yeast strains. Once fermentation was under way, the wines were racked to 228 litre, French oak barrels, none of which were new, and where they stayed for 3 months. We prefer old oak because it allows the wine to develop good texture, without the fruit aroma being over-powered by wood characters.

At the end of the aging period, all barrels were racked and blended in stainless steel, where it was fined with bentonite for protein stability and then sterile filtered and bottled on 12th July, 2017.

We definitely recommend this wine for early consumption.  Its lively aroma and bright fruit flavours make it an enjoyable young wine.  However, for those who like their white Bordeaux varieties with the complexity of some bottle age, 5 years in the cellar should see it develop the beginning of the mature notes of toast and butter. 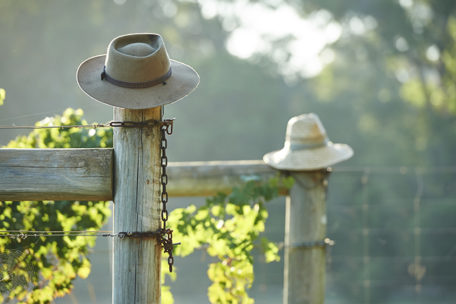 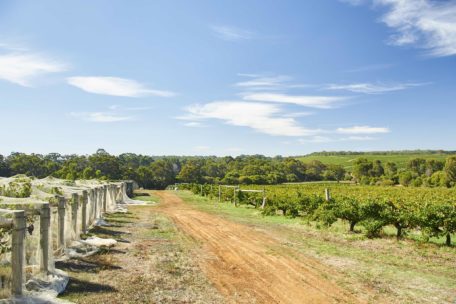 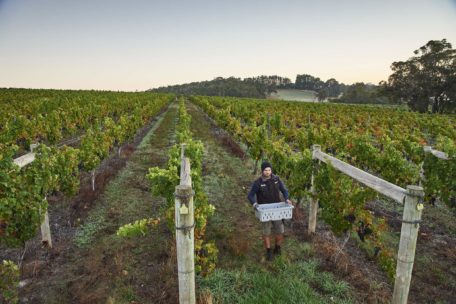 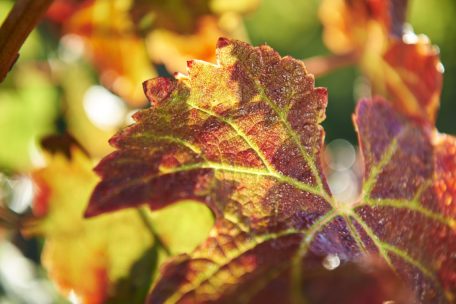 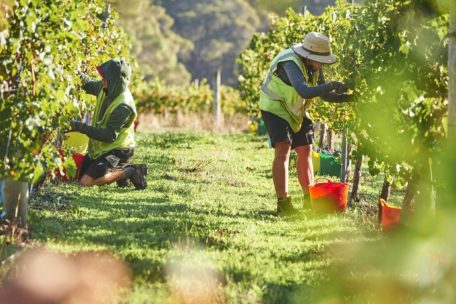 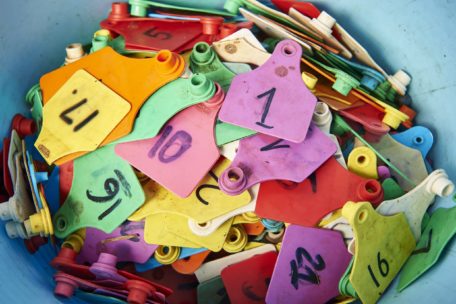 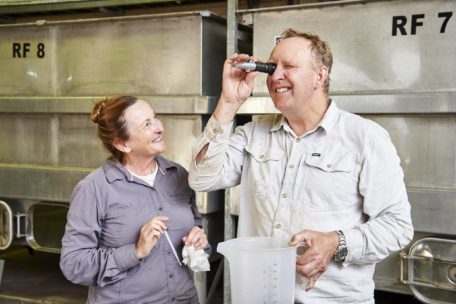 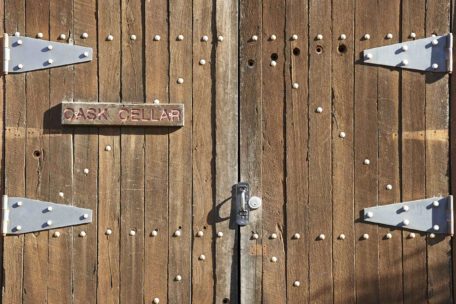