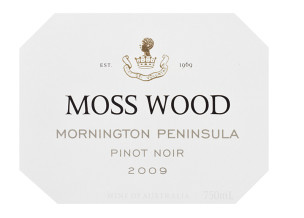 Colour and condition: Deepest of ruby hues, in bright condition.

Nose: Intense cherry and sap on the nose, it is quite savoury in character at first observation and then unveils a really attractive prettiness showing as strawberry and quince jelly notes which combine well with plum pudding-like complexity and a touch of oak.

Harvest Dates were 26th February for 114 and 115 clones and 26th March for the MV6. The Mornington Peninsula experienced beautiful ripening conditions through the early summer of 2009. Until the beginning of February we expected the average vintage commencement date. However, things then changed. The first week saw temperatures climb, with one particularly hot day, and after a brief respite, further hot days in the third week, which produced the terrible bush fires in the Yarra Valley and from which, thankfully, and Mornington was spared. As a former resident of South Australia, where the hot northerly winds of summer are legend, Keith could only watch in awe as the events unfolded. Unfortunately, in the modern world, we are somewhat insulated against the power of Mother Nature and every now and then she reminds us who’s really in charge. The hope was that conditions would abate quickly enough for the vines to recover and Mornington’s maritime climate came to the rescue. Temperatures moderated but there was a significant reduction in yields. Interestingly, as we went in to March, conditions eased dramatically, resulting in the wide disparity in harvest dates between the clones, 26th February for the 114 and 115 clones and 26th March for the MV6.

The fruit was hand harvested and then destemmed into open fermenters. With the 2008 we had trialled some closed fermenters to observe the impact on wine style. We chose to discontinue this with the 2009, preferring the better mixing afforded by the ability to hand plunge and the resulting gentle extraction. The must was chilled and held for cold soaking for 72 hours then allowed to warm up and seeded with pure yeast culture. Fermentations were carried out at higher temperatures, with a maximum set at 30°C and hand plunged up to four times per day. Once fermentation was completed, the different batches were tasted each day to monitor tannin balance and once this was achieved the wines were pressed and racked to stainless steel. After settling they were racked off gross lees into barrel, where they completed the malolactic fermentation. They were then racked and adjusted and the three clones were blended for the first time and the finished wine was returned to barrel. All the barrels were French oak barriques and 50% were new. At the end of December 2009 the wine was racked from barrel and fining trials were carried out. We trialled various agents, none of which added improvement, so the wine was left unfined. It was then sterile filtered and bottled on 31st May, 2010.

With its low yields giving complexity and concentration, we enthusiastically recommend this wine for aging. Using the development of other high quality Mornington Peninsula wines as a guide, we suggest at least 10 years cellaring will be required for the wine to develop full bottle bouquet.