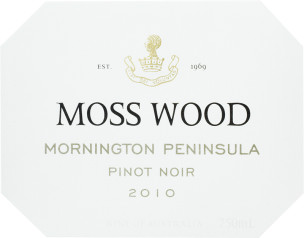 The fruit lift gives an initial impression similar to the nose. There are lively red and dark fruits of strawberry, plum and cherry that fill the front and mid-palate, then the finish is round with oak flavours and soft tannins giving good balance and length.

As we prepared for our third vintage in Mornington Peninsula, we were hopeful that after all the difficulties associated with the extreme heat of 2009, we might return to some semblance of normality in 2010. Luckily, Mother Nature decided she was on our side.

Conditions were ideal in Spring, with regular rainfall but no disruption to flowering, the mid-point of which was spot on average on 18th November, 2009. The steady conditions continued right through to harvest with consistent warmth and no extreme heat. Originally we had anticipated a slightly later than average start but beautiful days in February brought things to a head in the last week. All 3 clones, 114, 115 and MV6 ripened together and came off on 28th which gave a period of 101 days to harvest, slightly ahead of the average of 106 days. In the Mornington region, with its tendency to ripen Pinot Noir quite slowly, often leaving it with some greener, herbal fruit notes, the consistent warmth is always welcome.

The intention once again was to make sure the flavours had ripened to the point where the red and dark fruit characters were dominant. The effect of the great weather of the last week can be seen in the final sugar level of 13.6⁰ Baume, slightly higher than the 13.2⁰ we expected and resulted in a final alcohol of 13.8%, below the 14%, which is where Pinot Noir wines start to appear “hot”. Importantly, all the herbal notes were gone.

It is also interesting to compare the 2010 growing season for Pinot Noir in Margaret River and Mornington Peninsula because they were nearly identical. At our Wilyabrup vineyard, the variety was picked on 26th February, after 104 days had elapsed since flowering, for a ripeness of 13.6⁰ Baume. It was slightly cooler than average, taking 4 days longer than the usual 100 days. Mornington was slightly the other way, being 5 days ahead of its usual 106 but the sugar level was the same. This serves to illustrate that while Margaret River is often criticised by many for being too warm for Pinot Noir, this comparison of the growing seasons suggest it may be more suitable than some critics give it credit for. Certainly the quality and style would support this.

The system of production for both our Margaret River and Mornington Peninsula wines are virtually identical. However, it is not our intention to make the wines in a similar style. Rather, our technique is designed to allow them make a clear statement about where they are from, with their regional and clonal differences to the fore.

After hand harvesting, the fruit was immediately processed at the winery with destemming into small, open, stainless steel fermenters. These small tanks were then transferred to a cool room and left there for 3 days to allow the must to chill down to 8⁰C and cold soak. It was then seeded with a pure yeast culture and fermentation was controlled to a maximum of 30⁰C by shifting the tanks in and out of the cool room. Extraction of colour and flavour was by hand plunging up to 4 times per day. After tasting for tannin balance, pressing was carried out on 14th March, giving 15 days on skins.

The wine was settled on gross lees and went through malolactic fermentation. It was then adjusted and racked into 228 litre French oak barrels, where it stayed until July 2011. It was racked from barrel and fining trials were carried out to confirm tannin balance. It was decided to fine with egg whites. After this the wine was sterile filtered and bottled on 14th October, 2011.

As is typical with Pinot Noir, this wine has fruit depth and balance that make it very easy to drink as a youngster but this early appeal will not compromise its cellaring. With such good composition and fruit depth, it will definitely develop over the next 5 years, at least. Between 7 and 10 years of age it will repay those consumers who enjoy the Pinot Noir’s complex bouquet of mushroom and earth in combination with its bright fruits.