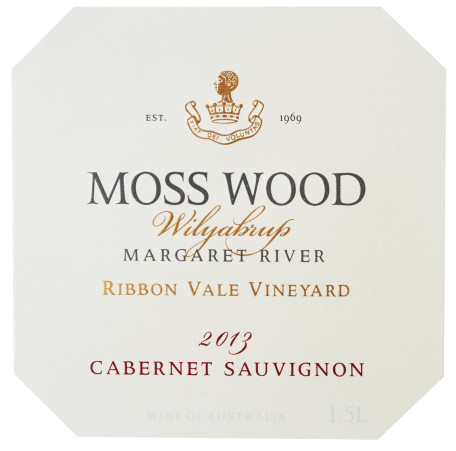 It has taken 14 vintages but the Mugfords are finally happy that they have got the Ribbon Vale vineyard where they want it to be and can release a varietal Cabernet Sauvignon as the premier wine from the property.

It has a deep brick red colour and is in bright condition. The nose is classic, almost old-fashioned Wilyabrup cabernet sauvignon, showing all the hallmarks of the region and taking us back to the future - we could almost be tasting a 1983. There are aromas of redcurrant, mulberry and blackberry with the typical background of a touch of eucalypt and tar and behind this is a touch of spicy, toasty oak. The palate is full bodied, with generous red and black fruits. Whereas with the Merlot there is brightness and freshness, this wine has density and concentration. The tannins are firm and provide a long platform upon which the fruit flavours sit and yet the wine finishes with roundness and balance.

We had a generally excellent growing season and yet we began the 2013 vintage with a degree of fear and trepidation. This was not because of any quality concerns but rather, we’d had a monumental hail storm on 30th November, 2012, the likes of which we hadn’t seen since 1996 and we were worried just how small our yields were going to be. The thing is, it is possible to see the damage but we don’t know the true extent until we actually start picking.

The first of the Ribbon Vale reds to come off was the Cabernet Franc on 4th March and its yield was down by 30%, which wasn’t as bad as expected. When we started Merlot 8 days later, we hoped for the same and yes, we were in luck. That left Cabernet Sauvignon, which started on 27th March and sadly our hopes were dashed - its yield was down by just over 50%. Such is life in agriculture. What did matter was quality and that was very encouraging.

Despite the stormy conditions outlined above, the season was warm to hot, especially at the end of December where we had one day with a maximum of 40⁰C, the hottest day for the summer. January temperatures eased but things warmed again at the beginning of February, although not quite as hot as December. March delivered typical autumn weather, so all the varieties moved gently to full maturity, especially Cabernet Sauvignon.

Cabernet Franc was hand-picked and destemmed into a small, open tank, seeded with a pure yeast culture and allowed to ferment at up to 30⁰C and hand plunged 3 times per day. After 13 days it was pressed to stainless steel, underwent malolactic fermentation and was finally racked to barrel on 13th April, 2013. The casks were all 228 litre French oak.

Merlot was hand-picked and destemmed into static fermenters, seeded with pure yeast culture and allowed to ferment up to 30⁰C and were pumped over 3 times per day. Skin contact time was 16 days, after which the wine was pressed to stainless steel. Malolactic fermentation was carried out by selected bacteria and after MLF the wine was racked to 228 litre French oak barrels on 23rd April, 2013.

Cabernet Sauvignon was hand harvested then separated into 2 batches. The first was destemmed into a small open fermenter, the second into a static fermenter and both were seeded with pure yeast culture. In the former, extraction was by hand plunging 3 times per day and in the latter by pumping over 3 times per day. The open tank stayed on skins for 17 days while the closed tank achieved its tannin balance a little sooner and was pressed after 14 days.

After malolactic fermentation both batches were racked to barrels on 27th May, 2013. All barrels were 228 litre French oak and 8% were new.

In a first for Ribbon Vale under the Mugford ownership, we now produce this flagship as Cabernet Sauvignon. The wine was blended on 12th January 2015 and is 92% Cabernet Sauvignon and 4% Cabernet Franc and 4% Merlot. After the blending it was returned to barrel till 14th September, 2015, 28 months in oak, when it was racked to stainless steel in preparation for bottling. The balance of the wine was excellent with no need for fining. It was sterile filtered and bottled on 2nd October, 2015.

When discussing a Wilyabrup cabernet sauvignon these days, it almost goes without saying this is a wine for the cellar. Although it’s from the Ribbon Vale vineyard, it shares some of the style of Moss Wood 1983 and we have no doubt it will develop in a similar way and so proudly recommend it for a minimum aging time of 20 years.