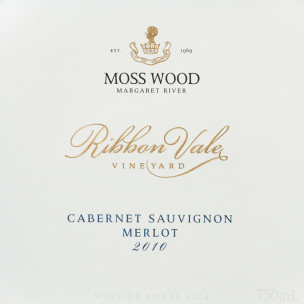 Nose: the 2010 red wines typically have lifted perfumes and the Cabernet Sauvignon Merlot is no exception. The normal Ribbon Vale concentrated Cabernet fruit aromas of red currant, leather and cedar are all in evidence but they are complemented by fragrant notes of violets and roses. The Merlot also adds a mulberry-like, dark fruit and the aging in barrel has added to the complexity with charry and tarry characters.

Palate: we would normally expect this vineyard to produce wines where the firm structure provides the base upon which all the other flavours sit. In some years, these quite dense tannins can be drying, requiring very long term cellaring to soften. However, in 2010, the generous red and dark fruit flavours give the wine a rich mid-palate and good length. The combination of an outstanding vintage and experience with the vineyard gives us confidence that the Ribbon Vale vineyard is now producing its finest Cabernet Sauvignon wines.

It might sound clichéd but the 2009/10 growing season was just about perfect. We had regular rainfall during Spring but missed out on conditions which may have compromised yields. At the same time, temperatures were warm enough to encourage even ripening but we received very little hot weather and so all varieties were spared any heat stress and the accompanying loss of flavour intensity. This is not to say there weren’t occasions when we looked at the weather and wondered just what we might be in for. In particular, we had a very impressive thunderstorm during November that was, for a brief period, right over the Moss Wood vineyard and produced some spectacular lightning, the shock waves from which rattled the Mugford house windows. These events are often accompanied by hail and we held our breath while it went by. Fortunately, it didn’t dump on us but we feared a repeat of December 1996, when a similar storm reduced the crop by around 80%. Sometimes you get lucky!

The other viticultural threats of disease and bird damage were also kept under control, so we arrived at harvest feeling confident. As is usual, the vintage produced typical variation. Yields on the Cabernet Sauvignon, and Merlot were above average, 12% and 7% respectively but Cabernet Franc let the side down slightly being 7% below average. We suspect the above mentioned thunderstorm and the associated downpour right in the middle of the Cabernet Franc flowering period probably caused the latter problem.

Harvest dates for Cabernet Sauvignon and Cabernet Franc were slightly early and their period from flowering to harvest were also shorter. On the other hand Merlot, which likes to be contrary, was later on both counts.

However, one aspect where the three varieties were consistent was ripeness where all were picked at slightly lower sugar levels than average. We think this gives an insight into the quality of the year, with the consistent but mild conditions allowing flavour, tannin and sugar ripeness to all proceeded in unison.

A further note regarding quality is the impact of higher yield for the Cabernet Sauvignon. It is an interesting fact that the Moss Wood wines of which we are most proud all come from these sorts of vintages ’08, ’05 and ’01 to name just a few. Yet it is frequently assumed that lower yield will produce better quality. Pinot Noir is often used as an example and yes, it seems to benefit from a commensurate increase in concentration. However, Cabernet’s greater depth of colour and tannin mean lower crop levels can increase concentration to the point where the wine is dense, unyielding and very slow to mature. Our best experience of this is the 1981 Moss Wood Cabernet Sauvignon, a very small-cropped year which took two decades to exhibit any maturity, roughly half the normal rate of development. The wine has extraordinary cellaring capability but we’re not convinced this is a great thing, other than to perhaps establish bragging rights. Take as an example the 1980 vintage – that Cabernet Sauvignon has now successfully cellared for 30 years and where the cork is sound, shows no sign of deteriorating. This being the case, it begs the question is there anything to be gained by keeping a low yielding year for say 50 years?

All the fruit was hand-picked and destemmed into small, open, stainless steel fermenters. Each batch was inoculated with pure yeast culture and fermentation temperatures were maintained at a maximum of 28°C. Extraction of colour and flavour was by hand plunging up to four times per day. The impact of tannin was monitored with daily tastings and the individual batches were pressed when optimum balance had been achieved. For the Cabernet Sauvignon this was 23 days, for Merlot 17 days and for Cabernet Franc, 10 days.

After pressing, each wine was racked into barrel where malolactic fermentation took place. Upon completion the wines were racked backed to stainless steel tanks, adjusted for acidity then returned to barrel.

The new blends were racked back to barrel, where they stayed until June 2012, for a total of 26 months in wood.

Both wines were racked to stainless steel and fined, the Cabernet Sauvignon Merlot with egg whites and the Merlot with skim milk, and then sterile filtered and bottled on 25th June, 2012.

Given the high quality nature of the vintage, we unhesitatingly recommend this wine for cellaring. The generosity of the year will of course mean the wine drinks very well in the short term. However, we believe that it will age well, in the mould of similar years from the past like 2001, 1996 and 1991. It will require at least 10 years in bottle to develop the beginnings of its bottle bouquet but our recommended cellaring time is 15 to 20 years.