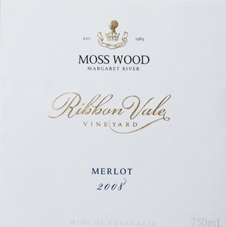 Palate: The wine presents immediate fruit generosity, with plum and black currant flavours filling the mid-palate. In addition, the hallmark of this vintage is the balance of tannin, which can so often be a problem with this variety. In 2008, the typically firm Merlot tannins sit neatly underneath, giving firm tannin all the way through but never being gritty or drying. At the very back, the toasty oak adds to the finish

Looking back at any vintage, it’s always interesting to speculate about why the quality and wine style turned out as they did. The first point of reference is, of course, to sit down and recall what the growing season was like, even if the memory can play tricks.

At Moss Wood, we felt the summer was notable for good, perhaps above average warmth during January and early February, followed by a quick change into cool, Autumnal conditions. At the time, the nights, in particular, began to feel quite cool and damp. So, the second thing was to attempt to verify this, when we looked at the record it showed the average temperatures for both February and March were the lowest they had been for all but one year of the previous decade. It seems it wasn’t just our collective imagination at work. At the time, we had a hint this was happening because the ripening slowed in late February, which leads to an interesting point. Although it may seem curious to an outsider, the finer points of grape ripening can sometimes be overlooked in the hurly burly of vintage. Since we can’t change the weather, only react to it, our focus has been to concentrate on grape sampling and charge in and pick each block when it’s ready. Never mind what the temperatures have been doing, let’s just get the job done! Although winemakers would love to have people believe otherwise, they are not God and wine is not made in a perfect world. Shock, horror! There have been times when our samples have not matched the ripeness of the harvested grapes and we have always put this down to errors in sampling.

However, the events of 2008 led us to review and change our approach. These days, when a sample is taken, the average temperature for the intervening period is checked, which acts as confirmation of the sample result. Perhaps not surprisingly to some, what we’ve found is that if the rate of ripening has been slower than expected, it’s almost certainly because temperatures have been lower. The samplers have been more accurate than we thought. The result of all this is we still can’t change the weather but we are now more considered in our response by being just that bit more accurate with our picking times. The overall incremental increase in wine quality may be small, but it will allow us to be more consistent. Returning to 2008, the January weather meant we were expecting an early vintage, much the same as we had experienced the year before. The early varieties confirmed this, coming off slightly earlier than average and we were preparing to roll quickly from one to the other.

However, the pressure eased and we had a positively leisurely completion to the season. We picked each section of the vineyard as it ripened and then we waited for the next part to be ready. This was all very well but it did mean we were exposed to some risks. The birds were frantically looking for food and moisture during the summer and they kept on attacking the bird nets. Fortunately we were able to keep them out and damage was effectively zero. We also kept an eye on the weather, in the hope that Mother Nature kept the rain away until we’d picked, and she also behaved herself. Cabernet Franc was first to come in, and like the other early varieties, it was two weeks ahead of its average harvest date of 17th March. Some of its early ripening may be the result of a lighter crop, which was down 35%, to 6.14 tonnes per hectare. This was followed soon after by the Merlot, on 7th March. Once again, this was early; being 13 days ahead and its yield was also down to 7.34 tonnes per hectare, a slightly less disappointing 14% reduction. Cabernet  Sauvignon completed the process on 22nd March, some 9 days earlier than average. At 5.02 tonnes per hectare yield, it was 35% down. Since warm weather speeds the ripening process,   this all suggests the season must have been quite warm. However, when we looked at the time taken for the period from flowering to final ripeness, a different story emerges. Merlot was 4 days earlier than average; taking 113 days to go from flowering to harvest, but Cabernet Franc and  Cabernet Sauvignon were both exactly average. Each flowered between one and two weeks earlier than average, so part of the early season is explained by this. Finally, when we go to the temperature data, the picture becomes clear. Each variety enjoyed at least an average number of hours in the optimal temperature range for vines but only a limited amount of extreme heat. There were only 42 hours above 33C. How do we summarise all this? In short, while the yields were  disappointing, the vines experienced an even, moderate season, with enough warmth for steady   ripening and just enough of the higher temperatures to ripen all the fruit aromas. However, the emphasis is on “just” because the lack of extreme heat is important. It has produced a vintage with fully ripened flavours and tannins, ensuring the palate has concentration and length. At the same time, the wines display delightful aromas, perhaps uncharacteristically fragrant for Cabernet  Sauvignon, in particular. While showing classic, red currants, it has retained some really lifted rose and pomegranate notes which are rarely seen.

After hand harvesting, the fruit was delivered to the winery where it was destemmed into small open fomenters, which were seeded with pure yeast culture for primary fermentation. The tanks were then hand plunged up to four times per day and the temperatures were maintained at a maximum of 28°C.

Skin contact time varied between the varieties and each batch was pressed according to taste. We taste each one twice daily to monitor the balance of tannins and make the decision to press when we perceive this to be at its best. In 2008 the Cabernet Franc was pressed after 16 days, the Merlot after 11 days and the Cabernet Sauvignon after 15 days. The different batches were then kept separate while they went through malolactic fermentation and they were then racked and blending trials were carried out. On 26th August the blends were put together – for the Cabernet Sauvignon Merlot, the combination was 56% and 44%, respectively. In the Merlot, the combination was 86% Merlot and 14% Cabernet Franc. Each year we make up the final blend based on blind tastings in our laboratory and our aim is to make up the best combination for that year. The 2008 blends were slightly out of the ordinary, with the Cabernet Sauvignon Merlot having more Merlot and no Cabernet Franc. The Merlot included a significant percentage of Cabernet Franc and fulfils a long-time Moss Wood ambition to produce this wine in the style of the great “Right Bank” wines of Bordeaux. The wines were then racked into French oak. For the Cabernet Sauvignon Merlot, 35% of the barrels were new and for the Merlot, 44% were new.

After nearly two years in oak, the wines were racked from barrel in May 2010. A wide range of fining trials was conducted but in the end, neither the Merlot nor the Cabernet Sauvignon was improved. So, the unfined wines were sterile filtered and bottled on 1st July, 2010.

As a varietal wine, Merlot is often judged as being rather simple and perhaps this is true when compared with Pinot Noir. Consumers are tempted by its generous red fruit characters and early plumpness, to consider it a wine for current drinking, with little to be gained by cellaring. We would like to respectfully disagree. While we certainly acknowledge its innate drinkability, it is very much a wine that develops complex bottle bouquet.

To illustrate this, we would like to point out that our first Merlot turns 10 this year and for those who may still have some in their cellar, we enthusiastically suggest you try the wine. It has developed earthy, tarry complexity but still retains good fruit aromas and gives the appearance of needing at least 5 more years to reach full maturity. This being the case, and with the significant improvements in our viticulture and winemaking we have achieved in the intervening years, we are very much of the view the 2008 vintage has the style and quality to at least match this result.

Therefore, our recommendations are, for those who want to see at least some bottle age characters, the wine should be cellared for at least 10 years. For those who prefer to see it in full maturity, we recommend a further 10 years cellaring thereafter.