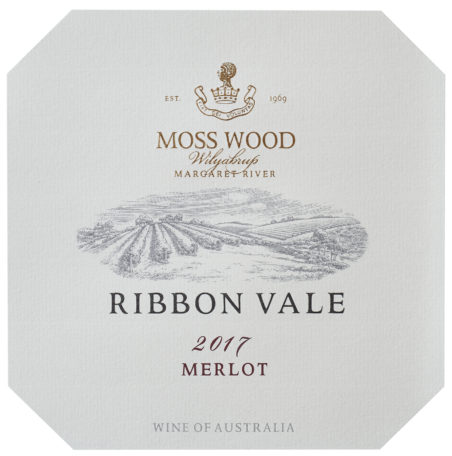 Full of nervous energy, its plummy fruit on one side and earthy, herbal acidity and freshness on the other. This will be ready when you are.   Published August 1st, 2020

Modelled on the great Merlots of Pomerol and Saint Emilion Moss Wood Merlot is now widely considered one of Australia’s best. I’ve beaten the drum for the last few vintages and 2017 again demonstrates the point. Fresh and vibrant with glossy fruit, touch of leather and smooth tannins. Satisfying and age worthy.

“A medium bodied and elegant merlot and one of the best in this line I can recall. Perfumed fruit strikes an impeccable balance of fine chalky tannins and seamlessly introduced oak. Floral notes on the nose with red berry scents. Controlled and long palate. A variety that benefits from vineyard work and winery refinements.” Published November…

Moderately intense merlot that has an impressive lightness and subtle power with blueberry, cedar, violet and a hint of wood-smoke. A seamless, smooth-textured red with a lengthy finish. Delicious now but with obvious potential. Published Oct 11th, 2019

Full of nervous energy, its plummy fruit on one side and earthy, herbal acidity and freshness on the other. This will be ready when you are.   Published August 1st, 2020

Modelled on the great Merlots of Pomerol and Saint Emilion Moss Wood Merlot is now widely considered one of Australia’s best. I’ve beaten the drum for the last few vintages and 2017 again demonstrates the point. Fresh and vibrant with glossy fruit, touch of leather and smooth tannins. Satisfying and age…

“A medium bodied and elegant merlot and one of the best in this line I can recall. Perfumed fruit strikes an impeccable balance of fine chalky tannins and seamlessly introduced oak. Floral notes on the nose with red berry scents. Controlled and long palate. A variety that benefits from vineyard work…

Moderately intense merlot that has an impressive lightness and subtle power with blueberry, cedar, violet and a hint of wood-smoke. A seamless, smooth-textured red with a lengthy finish. Delicious now but with obvious potential. Published Oct 11th, 2019

The Ribbon Vale Project – How Far Have We Come?

It’s almost 20 years to the day that we began negotiations with our neighbour, John James, for the purchase of Ribbon Vale.  There was a serendipitous meeting of needs. John, having established the vineyard in 1977, was looking for an exit strategy and we were looking to expand their wine production, through the purchase of a mature, high-quality vineyard.

Ribbon Vale suited the bill perfectly, sharing many key attributes with Moss Wood – similar Wilyabrup soils, cane pruning and of course, it was and remains unirrigated.  The purchase was settled on 1st March, 2000 and we set about putting our own stamp on the property.  What followed has been a fascinating adventure in grapegrowing and winemaking.  We had to update the trellising to the new (at the time) Henry system.  More challengingly, we had to learn how to make wine styles we hadn’t attempted before – Sauvignon Blanc and Merlot.  The latter has required us to play the long game.

Merlot has been a challenge but one we have enjoyed far more than initially expected.  This variety is the most widely planted in Bordeaux and very highly regarded there.  Anyone lucky enough to taste Chateau Petrus or Chateau Cheval Blanc would surely understand why.  Australian Merlot, with very few exceptions, is typically of only moderate quality and usually dismissed as soft, generic dry red.  We admit to making that very criticism ourselves but once we were exposed to high-quality Merlot and how it is made, a whole new world has opened up.  We have had to focus on the wines of Pomerol and St Emilion, looking in depth at their production techniques as well as the demanding task of tasting as many as we can.  Very demanding indeed!

Another twist in the tale is, for Moss Wood we felt and still feel, the Cabernet Sauvignon style from that vineyard isn’t enhanced by the characteristics which Merlot would bring to the blend.  So, with little or no experience we embarked on a very steep learning curve.

Amusingly, once we got to know Merlot, we discovered it shared several traits with Pinot Noir.  Just like its Burgundian cousin, Merlot demands special attention in the vineyard and will only ripen well if the shoots are properly positioned, the canopy is allowing good sunlight penetration and the yield is moderate.  This last point is crucial because Merlot will grow a monumental crop if allowed.  The record under our ownership is 14.6 tonnes/hectare for the 2000 vintage – not bad for an unirrigated vineyard!  Conditions in that year were exceptional and all varieties blitzed their average but we have trimmed it back since.  The long-term yield stands at a still very respectable 7.87 t/ha.  The quality risk is evident when we note that in the relatively warm year of 2000, the vines needed an extra 2 weeks to get all that fruit ripe and even then, sugar levels were only just where we wanted them and likewise colour depth.  Many bad things can happen in 2 weeks, like rain damage and bird attack to name just two and hence the need for careful management.

By the year 2000 we had a long track record of making Cabernet Sauvignon at Moss Wood and this gave us some useful insights into how we might manage this variety at Ribbon Vale.  However, every vineyard is different and we had to come to terms with what the new location required.  For example, the clone planted at Ribbon Vale is SA126, which performs differently to the Houghton selection at Moss Wood.  Even with improved trellising, we still spent several seasons understanding the flavour profile in the grapes and working out what levels of ripeness we should aim for.  Exactly the same is true for Cabernet Franc.

Looking back over this period then, it could be summarised in the following way.  We spent the first decade improving and analysing how the vineyard performed.  As a result, we have spent the second decade seeing a gradual improvement in the quality of the wine style but the job is not yet finished.  We have recently added Petit Verdot and Malbec to the Ribbon Vale vineyard and over the next few years we’ll be able to assess what role they may play in enhancing the Cabernet Sauvignon, in particular.

No doubt customers will have their own views on how the project has gone so far.  For us, we are most proud of the quality of the Merlot.  It’s not so much that we think it’s a better wine than the Cabernet Sauvignon but we are delighted with the overall improvement and are comfortable it is a serious wine, capable of bearing comparison with wines of this style from anywhere in the world.

The Ribbon Vale Cabernet Sauvignon has always been at a higher quality level but we are keen to see it recognised as one of the finest wines in this style from Margaret River.  We have evolved it to the point where its primary fruit characters make it almost the complete wine.  It has gone from requiring a significant blending component of Merlot, typically at least 20%, plus, of course, around 5-10% Cabernet Franc, to now just 1-2% each of these.  If it’s OK with everyone else, we’ll give ourselves a pass mark so far.

We have certainly mentioned this before but we’ll happily say again, 2017 is one of the very best seasons we’ve had.  The similarities with 1990 are uncanny and Keith gets a distant look in his eye as he waxes lyrically about what a sensational year that was.  For those with an interest in these things, 1990 remains one of the very few vintages which was good for every Australian wine region.

It’s worth noting 2017 was at the cooler end of our spectrum and as the season progressed, we were watching the weather with a degree of concern.  Merlot and Cabernet Franc have few problems in a mild season but here in Margaret River, Cabernet Sauvignon can be brought undone by our autumnal rain.  Luckily for us, April gave us a classic west coast Indian Summer and the vines were able to ripen the crop without a problem.

The numbers speak for themselves.  The cooler season is highlighted by the fact all 3 varieties took longer to ripen than normal.  For Cabernet Sauvignon, the flowering to harvest interval was 131 days, 4 days longer than average, while Merlot took 125 days and Cabernet Franc 124 days, 6 and 4 days longer, respectively.  The slower rate of ripening for Cabernet Sauvignon can also be partly attributed to its yield of 8.08 tonnes per hectare, a very solid 15% above average.  For Merlot and Cabernet Franc, things went the other way.  The former produced 6.27 tonnes per hectare, down by 20% and the latter yielded 7.19 tonnes per hectare, down 11%.  It was wetter and colder when they went through flowering, with 8 days when the temperature dropped below 8°C.

The sugar levels for all varieties were excellent, with Cabernet Sauvignon reaching 13.0 Baume and Merlot and Cabernet Franc 13.8 and 12.7, respectively.  Just as importantly, the tannin and flavour ripeness were excellent across all three.  The mild conditions have allowed them to express many of the pretty scented notes lost in warmer years.

We experienced no complications with disease or bird damage and so after being as patient as we have ever been, we got started with Merlot and Cabernet Franc on 5th April, 2017.  Cabernet Sauvignon followed on just over two weeks later on 20th April.

All the fruit is hand-picked then delivered to the winery where it is sorted, destemmed and put into fermenters.  Cabernet Franc and Cabernet Sauvignon are fermented in open, stainless steel tanks, where they are hand-plunged 3 times per day.  Merlot, however, is placed in small, closed fermenters, where extraction is by pumpover, 3 times per day.

The reason for the different treatment is we improve both colour and flavour by cold-soaking the Merlot before fermentation and for reasons we don’t fully understand, the pumping over during ferment gives better extraction than hand plunging.  Merlot has a mind of its own.

Fermentation temperatures were maintained at a maximum of 30°C and time on skins was slightly longer than usual.  Cabernet Sauvignon was 17 days, Merlot 20 days and Cabernet Franc a more typical 12 days.

After pressing, each wine underwent malolactic fermentation in stainless steel and once completed each batch was adjusted and racked to barrel.  All were French oak and all were 228 litre volume.  The Cabernet Sauvignon had 13% new barrels and the Merlot 10%.

Fining trials were carried out on both wines to see if tannin balance could be improved.  In the end, no fining was required for either wine.  They were then sterile filtered and bottled on 12th August, 2019.

The nose opens with a lifted display of the dark fruits, especially blackberries and blueberries.  There is also a floral note, reminiscent of roses.  Behind this lies Merlot’s complex notes, typically found in all its best wines - tar, leather, pencil shavings, combined with some light charry oak and earthy notes.

This follows a similar thread to the nose, where the initial impact is generous blue and back fruits, filling the front and mid-palate.  It is full bodied and it has a supple feel, with the tannins in good balance.  The finish is a classic combination of Merlot’s firm, drying tannin, sitting beautifully with the tarry and earthy notes and the background of soft oak.

We definitely recommend medium to long term cellaring for this wine.  Yes, it’s from a very good vintage, with the fruit depth and balance of a classic year, supple and very easy to drink.  Don’t be deceived.  This has the structure to last for decades and those who prefer some age on their wines won’t be disappointed.  We recommend a minimum cellaring time of 5 to 10 years, by which time the wine will have begun to soften just a little.  Full maturity will be reached after 20 years of age.