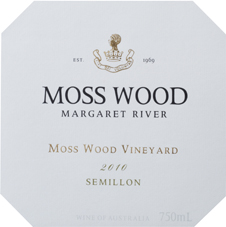 Nose: Fresh fruit aromas of grapefruit, apple and  fig. There are also strong notes of pear and musk which is unusual in Moss Wood Semillon and seems to be a feature of 2010. Although we are not completely certain, we believe this is the result of a predominance of distinctly pink berries, as described above. This is a feature of the variety and they occur every year but for reasons about which we are unsure, they were plentiful in 2010. This distinctiveness also applies to the flavours and these grapes have almost a muscatelike  floral character. This complexity is further enhanced by background notes of caramel and lanolin.

Palate: This is classic Moss Wood Semillon, combining crisp acidity with full body and a slight firmness of tannin on the finish. The mid-palate has ripe apple, fig and pear flavours giving a generous, almost sweet feel, despite the fact the wine is completely dry.

Our last two vintages have been notable for the very even weather conditions, where extreme heat has been avoided but the days have been sufficiently warm to promote even ripening. The vines responded accordingly, with good shoot growth early in the season, a good fruit set during flowering and then retention of excellent varietal aromas during ripening. The even nature of the season can be seen in the production data. The median harvest date for the Semillon is 13th March but this year, it was slightly early, being the 7th. This is also confirmed by the time taken to go from lowering to harvest, where, at 97 days, the season was 8 days ahead of the average. The affect of the season was probably also enhanced by a slightly below average crop. The long term mean for the Semillon is 10.96 tonnes per hectare, whereas 2010 was down by a not insignificant 16%, at 9.21. As an aside, the lower yield is something of a disappointment. Crop levels began trending down after 2004 bottoming out in 2006, so although we would have preferred a bigger crop at least 2010 is part of a trend of slowly increasing yields over the last 3 vintages. We are not certain why this happened but are pleased that measures we have taken appear to be working. As readers might imagine, with so many things in our favour, the fruit intensity of the wine should be of a high order and indeed it is. All the typical Moss Wood Semillon characters are on display – apples, figs and honey etc but for those with an eye for the interesting detail of any vintage, we report something of a curiosity about this year’s Semillon. It produced a significant number of pink berries. Although Semillon is obviously a white grape, readers may be amused to learn that rose-coloured berries are quite common and occur in most vintages. However, for reasons about which we can only speculate, 2010 conditions produced them in much greater numbers. They have a distinctive musk, or muscat-like flavour that is almost confectionery in nature and this really adds to the complexity of the 2010.

We happily acknowledge that Moss Wood is a cautious organisation which focuses on maintaining consistency of style and quality in each of its wines. Yet despite this, we are proud of our record in trialing new techniques and exploring different ways of doing things that might enhance what we do. So as we describe our production process for 2010, it may, or may not, surprise to learn that we have just about come the full circle and this latest wine has more in common with 1976 than 2006. By way of explanation, Australian Semillon varies somewhat between regions, as a comparison of Hunter Valley and Margaret River would attest. However, regardless of origin, all the wines are famous for pristine fruit characters, which give drinkability and distinctiveness in the short term. Similarly, over the next decade, these same wines will develop complex bottle bouquet. The crucial point is these styles all depend on good depth of primary fruit aromas in the young wine. Having tried a variety of methods to enhance fruit depth and complexity, over 30 years, we have returned to where we started. So, our technique is quite simple and designed to achieve that end, much as the white wines were produced in the 1970’s. The best ripeness for Semillon in our vineyard, depending on the warmth of the season, seems to be about 12.5°Bé. We aimed to match that this year but our sampling must have been slightly astray because the lab result said 12.8°Bé but the final alcohol of 14% says it was more like 13.2°Bé. As we noted earlier, not even winemakers are perfect. The fruit was handpicked and delivered to the winery where it was destemmed, crushed, chilled and pressed. The free run juice was then settled at 12°C for 2 days before the clear juice was racked and seeded with pure yeast culture. The pressings fraction was fined to reduce tannin and then racked and added to the main blend. Fermentation was then maintained at 15°C and proceeded through to dryness where the batch was allowed to settle on gross lees for a week. The clear wine was then racked off and fining trials were carried out. The decision was made to fine with bentonite, for protein stability, and nothing else. After fining, the wine was cold stabilised and then sterile filtered and bottled on 30th June, 2010.

The wine presents with enjoyable fruit aromas and flavours and can be consumed by itself as an aperitif or with food. However, its concentration and complexity will repay patience and we recommend it be cellared for at least 10 years. It has a style that is reminiscent of the 1995 vintage which has aged beautifully over its 15 years and is now a wine of great complexity. We believe the 2010 is destined for similar things.