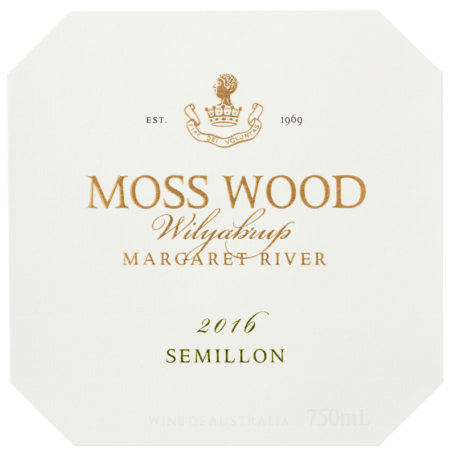 Amongst those of us at the winery, the 2016 vintage is one of our very favourites and this is especially true with the Semillon.  It is a tribute to the variety that a wine can be so complete with such simple technique.  The colour is light to medium straw, with green tints and the condition is bright.  The nose is lifted and scented with fruit aromas of green pea, lemon sherbet, figs and apples, so fresh, in fact, the classic lanolin and oily notes are, for the moment, sitting very much in the background.  On the palate, the effect is the same and absolutely classic Semillon in style, with lemon, apple and fig flavours sitting atop lively acidity and firm tannin, all combining to give great texture and length.

Looking back at the 2015/16 growing season, from a viticultural perspective, it was very agreeable.  Annual rainfall for 2015 was good, albeit very slightly below average, at 959mm and Springtime conditions were benign, with no wind or hail damage.  Yet, as is her way, Mother Nature saw fit to throw in a couple of challenges, just to keep us on our toes.
Through the flowering period, temperatures were mild and Semillon took 4 weeks to complete the process, roughly a week longer than usual.  Through that period the vines experienced 9 days where the temperature dropped below 8⁰C and also received 52mm rain and neither of these are good for the process.  At the time, we were suspicious yields may be affected and regretfully were proven correct.  The crop was down by a whopping 67% to 3.36 tonnes/hectare.  Further investigation revealed both bunch weights and bunch numbers were down by around 30%.
Despite an early signal of low yields, in classic Moss Wood fashion, we remained optimistic leading up picking.  During January we received 112mm rain and in February a further 20mm.  This can be a blessing and a curse, depending on just when it falls and this year it was a blessing.  The earlier rain came when the fruit was still green, so it didn’t split, and we avoided bunch rot.  When the later falls occurred, the vines had adapted, they had got used to the water uptake, so once again, there were no problems with splitting or the oft resulting disease.  For unirrigated vineyards like Moss Wood and Ribbon Vale, summer rain is always welcome and this meant we were confident it would solve any yield deficiency associated with poor flowering.  How wrong we were!
More importantly, as far as temperature goes, the season was near-perfect.  Mild conditions prevailed throughout, with no temperatures over 40⁰C and indeed only 2 days when the mercury got above 38⁰C.  Yet there was an abundance of the right temperatures for ripening, with the Semillon receiving 894 hours between 18⁰C and 28⁰C and 56 hours above 33⁰C, more than enough to accumulate sugar and achieve good flavor maturity.  By harvest time it had reached a ripeness of 13⁰ Baume, having taken 101 days to get there.

The grapes were hand-picked, as for all our wines, then destemmed and pressed and the juice was cold settled for 48 hours.  After settling the clear juice was racked into stainless steel where fermentation was carried out using various yeasts in sequential inoculations.  After fermentation the wine was fined for heat stability, sterile filtered and bottled on 28th June, 2016.

Any discussion of cellaring seems almost superfluous. There is such drinkability in the young wine it is delicious now and yet its intensity and structure will see it age for decades, literally. Perhaps it’s best to make our usual Moss Wood Semillon observation. For those who enjoy the mature characters, it is best kept for a minimum of 10 years, by which time it will have developed a little of the bottle bouquet but for those who want to see it at full maturity, 20 to 25 years is the recommended cellaring.