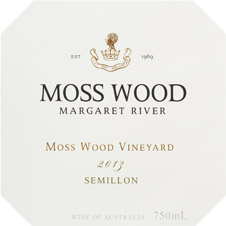 Palate: Presents a generous, yet fresh and crisp combination of apple, grapefruit and fig flavours across the middle palate and finishes with a honey-like sweetness, over just a touch of astringency at the back. There is good length and smooth texture.

Let’s begin by saying it’s good to be back. Readers may have noted there was no 2012 Moss Wood Semillon and we are sad to admit this is the first time we haven’t released this wine since the original vintage in 1977. We must also admit last year’s wine was not sold because it simply wasn’t good enough. We have a proud, 36 year history of making high quality Semillon and we could not risk our reputation by selling a wine that did not meet the highest standard.

Having got that out of the way, we are also pleased to note that our comeback wine is from a particularly good year. The dream run for quality continued but unfortunately not for quantity. Initially our spring weather was good and flowering conditions were excellent. Regular rain without damaging winds had kept the vines growing nicely. Flowering commenced in the first week of November and the next 2 weeks were delightful, with daily temperatures in the low to mid 20’s, apart from the 21st, when the mercury peaked at a beach-going 29oC.

Unfortunately, it was too good to be true. A strong weather system arrived on the 27th November and continued to batter us for the next 4 days, including a serious hailstorm on the 29th. Since the weather had been so good during the preceding 2 weeks, the Semillon had finished flowering and this may have been a blessing. Had the recently opened flowers been subjected to the full fury of the storm, our yield losses may have been even worse. Regardless, our yields took a big hit with the Old Block eventually producing 5.61 tonnes per hectare, down by 48% compared to its average of 10.7. The School Fees block yielded 10.1 tonnes per hectare, down 20% on its long term average of 12.65. We suspect that damage in the latter was limited by virtue of its more sheltered location, although the physical appearance at the time didn’t really suggest this.

The last time we had an event like this was December 1996 and its impact was slightly less serious. Old Block Semillon yield in 1997 was 9.08 tonnes per hectare, 15% down on the long term average. The earlier storm was no less severe but came from the southwest, as opposed to the northwest in 2012, meaning the Semillon was much more exposed last year.
Once this problem was behind us, we proceeded to have a much more normal year. The birds began to show their usual interest and so nets were applied toward the end of January and we avoided any damage. Our fungicide spray program was successful and we had no disease issues and as we arrived at the beginning of February we settled into masterly inactivity while we waited for the fruit to ripen.
Mother Nature certainly did her bit. January was warm but not too hot and the vines made steady, if somewhat slow progress with ripening. We had only 11 hours above 33oC. These very pleasant conditions continued until 10th February when temperatures began to climb and over the next four days they climbed into the mid to high thirties. We had our warmest summer day on the 12th, when the mercury topped out at 39.5o.
This hurried the Semillon along and we picked it on 19th February, almost three weeks ahead of its average harvest date of 11th March. Ripeness was 12.7o Baume, almost exactly on the average of 12.6o. No doubt the warm conditions and small crop brought the harvest date forward.

The fruit was hand harvested then de-stemmed, crushed and pressed. The free run juice was settled for 48 hours and then the clear juice was racked in preparation for fermentation. To promote complexity, 2% of the volume was taken as fluffy solids from the settling lees. Pure yeast culture was then added and fermentation proceeded at around 17oC for 13 days. The pressings were prepared separately and were fined to reduce the tannin concentration and settled for 5 days. Once clarified, the clear juice was racked, seeded and fermentation proceeded at 18oC for 27 days. The ferment was typically slower and is a product of the fining treatments we applied to improve the mouth feel of the final wine.

After a week of settling on their gross lees, the two components were racked and blended to produce the final wine.

Once the blend was completed we carried out fining trials with a variety of agents. In the end we concluded there was a slight improvement of the tannin balance using isinglass and so the whole batch was treated.
The other treatment we use as a matter of course is bentonite, to ensure the wine is heat stable. Readers may be interested to know all wine contains naturally occurring protein which can precipitate in the bottle. There are a variety of reasons why this may occur but the primary one is excess heat. If a wine warms up, something that is possible during transport, a fine haze may develop which is the aforementioned protein dropping out of the solution. This is entirely natural and not in the least bit harmful to consumers but it does diminish the appearance of the wine, especially with white wines, which people expect to be bright and clear in the glass. Hence, all our white wines are treated to minimise the chance of this happening. Our reds, on the other hand, are not. Consumers are far more accepting of a “crust” in these wines. After fining the Semillon was sterile filtered and was bottled on 20th May, 2013.

Although Semillon is noted for its ability to cellar for the very long term, this wine offers enjoyable early drinking with its generous fruit flavours and freshness.

However, the structure of the wine, with the crisp acidity and the presence of some tannin on the finish, make it ideal for cellaring. Over the next 5 years it will begin to evolve and show the first hints of classic Semillon bottle bouquet of butter, caramel, lanolin and toast. We expect it to reach its peak between 15 and 20 years of age and in good cellars, to continue to age well for at least a further 10 years.