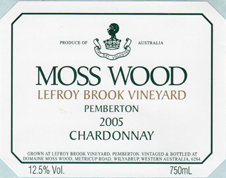 This will be the ninth and final vintage of a Moss Wood Chardonnay from Pat and Barbara Holt’s Lefroy Brook vineyard which is entirely covered by netting because of its situation surrounded by national forest near the Cascades about 10 kilometres from the townsite of Pemberton. When Lefroy Brook was planted in 1982, it was the first vineyard in what has become the Pemberton wine region. Its viticultural management has been carried on by the Holt’s since then.

The Moss Wood 2005 Lefroy Brook Vineyard Chardonnay is very much in the Pemberton style – fine, tight and elegant with pristine lemon and grapefruit citrus flavours, a touch of smokey oak, and powerful racy acidity. It will flesh out with time in the bottle while retaining its finesse and showing greater complexity. Can be cellared for at least five years with confidence.

The winemaking has once again been conducted along exactly the same lines as the Moss Wood Chardonnay from Wilyabrup.

Can be cellared for at least five years with confidence.