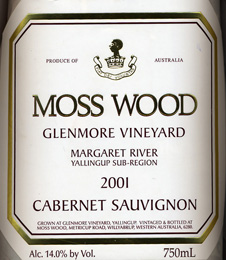 The fifth release of the Glenmore Vineyard Cabernet Sauvignon has attractive blueberry and loganberry perfumes, is soft round and silky, has mulberry, blueberry and redcurrant flavours and fine, ripe tannins. It is a generous red that is opulent and densely concentrated: muscular in structure yet well balanced and powerful yet elegant.

A great season and skilful and industrious viticulture (adds IB) has produced the best Cabernet yet from Ian Bell's Glenmore Vineyard at Yallingup, ten kilometres north of Moss Wood. The north-facing vineyard with gravelly, red brown loam over clay is on Bell's family farm, just off Caves Road on the comer of Injidup Road. The first hectare of cabernet sauvignon was planted in 1990 and maturation of the vines goes a long way to explaining the intensity this wine now develops.

Conditions during the growing season were generally mild with just an occasional hot burst during the Christmas break and on the first weekend in March. Drought conditions didn't adversely affect the vines which ripened without difficulty. We have often made comparisons between the 2001 and 1991 vintages and continue to see similarities between the two wine styles which support our observations about the similarities between the growing seasons. We note, however, that 2001 didn't experience the same heat load in early February. The terrific fruit intensity of both years is a hallmark.

As always, the Glenmore was made using the same approach as the Moss Wood Cabernet. Once in the winery, the fruit was de-stemmed, put into open fermenters and seeded with a pure yeast culture. Fermentation took place at quite high temperatures (around 30°C) with the tanks being plunged four times per day. Pressing took place after the wine had been left for 14 days on skins, post fermentation.

After it had been pressed, the wine stayed in stainless steel tanks for one week and was then racked off gross lees into 228 litre French barriques - 25% of which were new. It underwent malolactic fermentation and once that was completed, the wine was racked to a stainless steel tank, analysed, adjusted for acidity and S02 and then returned to barrels, where it stayed for twelve months before being bottled in July.

The earlier Glenmore Cabernets are aging well. We believe that the 2001, if well cellared can be confidently put away for five to seven years, during which time it will mellow and gain greater complexity.