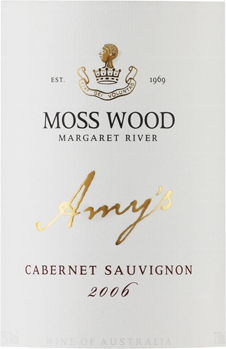 From early this year we have been subtly revamping and finessing our labels. However, with Amy’s, you might see a more dramatic move to the contemporary which we think is in keeping with the style of Amy’s and its role as a wine that introduces new customers to Moss Wood. We hope you like the new label and will let us know if we have been successful in hitting the mark or not.

Keith describes the Moss Wood 2006 Amy’s as having bright fruit aromas with some blueberries from Glenmore and raspberries from the Montgomery vineyard with charry oak and attractive floral fruit notes. The palate shows concentrated red and dark berry flavours across the mid and back palate, good length, and well balanced tannins and smoky, toasty oak on the finish. Most pleasingly, it has generosity of fruit.

Wine writer Peter Forrestal’s notes describe the 2006 Amy’s as having bright dried herb aromas, rich, ripe, concentrated blackcurrant and mulberry flavours with some earthy, minty notes. It is well-balanced, has good depth and length, succulence in the mid-palate and pleasing approachability to finish.

We start the discussion about this new wine with some opinions about the 2006 vintage. There has been a deal of debate about the quality of the vintage for reds in Margaret River - not surprisingly, as this was the coolest vintage on record by some considerable margin. Opinions amongst the regions winemakers are varied, to say the least and so readers can expect to see more of this in the future. The cool vintages have been the most challenging in the region with two notable exceptions - 1982 and 1990 - both of which have produced some of Moss Wood’s and the region’s greatest-ever wines. The Moss Wood team are very pleased with the Amy’s components and the Ribbon Vale reds from 2006 and rank it ahead of the cool vintage that preceeds it, 2002. Lessons learnt from the latter were put to good use. Perhaps the most important of these was the value of good fruit exposure, something we always pursue but which really comes to the fore in very cool conditions. In order to maximise the quality, the cabernet sauvignon vines were leaf plucked by hand, leaving all bunches fully exposed to the sun. With zero shading the fruit temperatures reach higher levels and this promotes the loss of “green” fruit aromas. It is also thought to enhance ripening of the seeds, giving tannins that are ripe and creamy - which gives lovely texture and greater length. Although we have used this technique in Pinot Noir for a number of years, there are risks associated with it, particularly sunburn. However, after analysing the temperature data up to mid- January 2006, the Moss Wood team realising that the season was very cool - the maximum temperature was 4°C below average - decided that the season had been so cool it was worth the risk to give the vines the chance to produce the maximum amount of ripe fruit. Hence the decision to do full leaf removal and they encouraged the Amy’s growers, Ian Bell and Max Montgomery, to do the same.

In order to add some better science to this method, a statistically sound trial has been conducted by new staff member, Rob Gherardi, as part of his BSc studies at the Margaret River campus of Curtin University, to see if different shading within a single block is perceptible in the finished cabernet. The three treatments were replicated in the Long Rows Block, where the vines were given the normal treatment of moderately exposed, as well as 50% exposed and fully exposed to the sunlight. Interim results suggest the differences are perceivable although the final tastings will confirm if this is correct. In the end we hope this will make for more informed decisions about the appropriate level of fruit exposure in the cabernet.

In summary of all this, Keith is very pleased with the quality of the fruit notes and the ripeness of the tannins in the Amy’s and that’s the reason he’s prepared to compare 2006 to 1982 and 1990. There is one important proviso. While the comparison is favourable, there is no doubt in his mind that the two earlier vintages are better. The final opinion on the Moss Wood 2006 Cabernet Sauvignon is still evolving.

The 2006 Amy’s was made according to the traditional method followed with the Moss Wood cabernets or as Keith says ‘It is treated just like a Moss Wood wine.’ It was destemmed into open tanks; seeded for fermentation with cultured yeast; handplunged four times a day for colour and tannin extraction during fermentation; each batch is left on skins for generally four days; tasted for tannin balance, pressed, and racked to barrel where it went through malolactic fermentation. However, compared to the home vineyard cabernet, it does have less time on skins and less new oak (25% is new / one / two and three year-old oak) and only 12 months in oak. After 12 months, the wine was fined with skim milk, sterile filtered and bottled on July 27th, 2007.