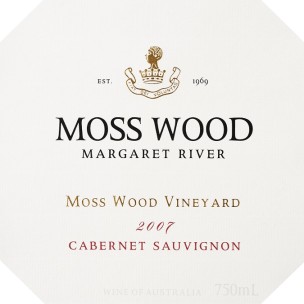 Nose – very typical Cabernet Sauvignon fruit aromas. Red currant, mulberry, dark chocolate combine with a background of charry oak, cigar box and spice. It is worth noting the wine’s concentration is such that it can take several minutes to unfold. We recommend allowing it to breathe.

Palate – the immediate impression is one of full-bodied, mouth-filling red and blue fruit flavours, giving a luxurious feel. Although the phenolics are firm they are more than balanced by the juicy concentration, so texture is smooth. Length and persistence of the flavours are enhanced by charry oak notes that leave gentle, slightly bituminous tannins on the finish.

Moss Wood 2007 Cabernet Sauvignon - is it 1976 Re-visited? When Keith started at Moss Wood for the 1979 vintage, it was an exciting time in the Margaret River region. Although the wine industry was tiny and very much in its infancy, armed with the scientific backing of Dr. John Gladstones, the new vignerons were filled with optimism about the future. The sky was the limit as far as wine style and quality were concerned and the new producers had a blank canvas upon which to work. Of course, there were many wines from around the world that were seen as benchmarks but the youth of the local industry meant the boundaries were not limited by any historical bias. This fertile environment fostered numerous discussions with the then owners, Bill and Sandra Pannell, about what style they should pursue for their fledgling wines. It was not uncommon for these to progress outside Moss Wood and there were many robust debates with the other new growers. The wine styles we now know as typical Margaret River were forged in part by the splendidly argued cases (with thanks to Sir Humphrey Appleby) presented by our neighbours Tom Cullity, David Gregg, and Kevin and Di Cullen among many others. Each producer sought to make a wine of significant quality that could make its way on the world stage and at the same time would be an expression of their vineyards and the region. At Moss Wood, we put significant effort into developing an appropriate style for each of our varieties but the Cabernet Sauvignon, being the first wine, was our primary focus at the time. Naturally, we looked to the great wines of Bordeaux for inspiration and carefully examined the style of numerous of that region’s wines in the search for clues. No doubt you can imagine the sheer drudgery of having to spend hour after hour tasting top quality French wine. These are the sacrifices that winemakers have to make! All jokes aside, we were always very much aware that we were making wine in Margaret River and if we wanted to make wines like those of the Medoc, then that’s where we should go. Margaret River’s individual climate meant it would always be different. As luck would have it, our initial vintages had seasonal variations that produced a series of quite distinct styles and this gave the opportunity to debate the benefits and drawbacks of each. It is now a matter of Moss Wood folklore that the vineyard produced what turned out to be three great vintages in a row, 1975, 1976 and 1977 and which became our early benchmarks. The 1975 was admired for its finesse and complexity, the 1976 for its ripe generosity and the 1977 for sharing a bit in common with both its older siblings. The middle wine produced a curious response. It was by far the ripest of the three and had a luxurious feel. The generosity of fruit, with ripe red currant aromas and flavours, was quite remarkable. Certainly it was popular with both consumers and critics alike, who especially liked its seamless tannins. This feature caused much discussion about whether it had the right structure to age well. The wine was so supple and drinkable many doubted its cellaring prospects, including the new winemaker. Over the intervening years the doubters were proven wrong and the 1976 developed in the bottle to become one of the vineyard’s finest. It is interesting to consider the ripeness of the 1976. There has been a tendency in recent times, perhaps in response to the production in Australia of some very ripe wines, with alcohol often exceeding 15% alcohol, to look back fondly to earlier times, when good wines were made with lower alcohols. As is often the case, these generalisations are not really true. Despite being made over 30 years ago, the 1976 Moss Wood Cabernet Sauvignon had 14.3% alcohol and was never considered “hot”or “flabby” and went on to develop excellent character after cellaring. Perhaps the key is balance of all features, rather than ripeness alone? We have since made several vintages that have some commonality with the 1976, most recently the 2004 and 2000, although neither of those were quite of the same quality. However, with the 2007 we believe we have a serious rival. After the very mild conditions that prevailed in the previous vintage, it was sheer pleasure to enjoy some consistently warm conditions in 2007. The contrast is quite striking. After being 21 days behind the average harvest date in 2006, the median harvest date for Cabernet Sauvignon was 9th March or 19 days ahead of average. This means our coolest and warmest harvest dates are separated by a whopping 41 days, or effectively 6 weeks. From the winemaker’s perspective, there’s no doubt about which season we would prefer. So long as we don’t get extreme heat, causing quality problems like sunburn, we’ll take a warm year, like 2007, anytime. In fact, when we look at the time taken for the grapes to go from flowering to harvest, it was not as warm a season as its dates suggest. For example, the block we call the “Short Rows” took 114 days to complete this period, only 4 days behind the average of 118, so this suggests the early harvest was as much a product of an early budburst as it was hot days during summer. We can speculate that this shows up in the quality of the wine because it is a finer wine than we would expect in a warm season. Other aspects of the season were also favourable. There were no problems with disease, the birds were controlled by the application of nets and yields were good. The warmth of the season meant the vines had ample opportunity to ripen the crop, regardless of yield. However, for the record, Cabernet Sauvignon, at Moss Wood, averages of 7.52 tonnes per hectare and in 2007 the yield was 7.4. Petit Verdot yielded 5.66 tonnes per hectare as compared with its average of 5.88 and Cabernet Franc produced 6.82 tonnes per hectare compared with its long term yield of 6.78.

With these figures, it’s easy to see that all the varieties were fully ripe when picked and this is a further pointer to the wine style. Each one produced its classic and distinct, dark berry notes. The Cabernet Sauvignon has rich red currant notes, the Petit Verdot has bright confectionery notes and the Cabernet Franc is all cherries and summer pudding. The technique of production was typical for Moss Wood Cabernet Sauvignon and follows our traditional approach. With each batch the fruit is destemmed into open, stainless steel fermenters, seeded with a pure yeast culture and allowed to ferment at temperatures up to 30C. Extraction of colour and flavour is by hand plunging up to 4 times per day for the first 72 hours, dropping to once per day by completion of fermentation. Skin contact time varied from 7 to 13 days and each batch was drained and pressed once the correct tannin balance had been achieved. After pressing, the wine underwent malolactic fermentation in stainless steel tanks and was then racked into barrels. All the casks were 225 litre French oak and 55% were new. Apart from a racking at the end of the first year, the wine stayed in barrel until November 2009 after which it was blended and fining trials were carried out to review tannin balance. After looking at the effect of various agents we decided the wine could not be improved and no fining was carried out. The wine was then sterile filtered and bottled on 21st December 2009.

Cellaring – this is a very attractive and drinkable vintage and it will certainly provide enjoyable early drinking. However, using the 1976 vintage as our example, we strongly recommend that those who have the opportunity to cellar the wine should do so. It will take at least 10 years to develop some bottle age characters and will probably reach its peak somewhere around 20 years old. However, it should continue to be drinkable up to 30 years old, at least and especially for those bottles under screw cap.