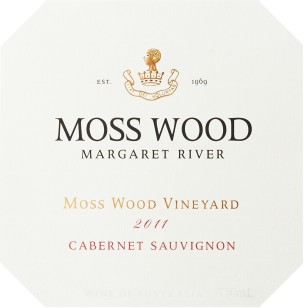 Let us make clear at the outset, the 2011 vintage at Moss Wood was extremely good, potentially great.

The point of this statement is to clear up any misconceptions that may have built up around the legend of the very difficult conditions experienced in south-eastern Australia for 2011.  In those regions, with the notable exception of the Hunter Valley, the vintage was very difficult, largely because of the breaking of a decade long drought.  Sometimes the tyranny of the distance of 4,000 kilometres works for us in a good way.  Our unfortunate colleagues on the other side of the country had to deal with very trying conditions, to say the least.  As is always the case, the best grapegrowers and winemakers made a good fist of things and produced excellent wine but, generally speaking, the vintage has a poor reputation.  Our point is not to draw attention to the problems of others but rather to make crystal clear that these conditions did NOT occur in Western Australia in general, and Margaret River, in particular.

And while we are on the subject, we definitely do NOT want to be seen as being smug because nothing could be further from the truth.  Those of us who work in agriculture know and understand that our turn for a difficult season will come again.  Mother Nature has a way of keeping us honest.

So, what did happen in 2011 at Moss Wood?  It was a very good season, indeed, and provided more of the same on the theme of west coast Indian summers.  Annual rainfall for calendar 2010 was 9% below average, at 880 millimetres.  However, we continued to receive timely rain, right through Spring and Summer for a total of 183 millimetres across that period.  In particular there were two very useful falls of 23mm and 32mm in the first and last weeks of January, respectively.

Although rain can disrupt our fungicide spray program, we managed to keep things on track for 2010/11 and we had no disease concerns.

Up until the end of January, the temperatures had been warm but not too hot.  According to the thermometer, 2011 was in very good company at that point with an average temperature across the season of 19.35⁰C, almost exactly the same as the mighty 2001 at 19.37⁰C.  Mother Nature then decided to turn up the wick and from 15th to 28th February we had a succession of days with maxima in the mid-30’s.  On the 26th we had the hottest day of the Summer when the mercury peaked at 39.2⁰C.  To put this in perspective, we went on to record our warmest February since 1998, with an average temperature of 23.76⁰C, compared to the average over the same period of 21.21⁰C.

Naturally enough, this kicked the ripening along and so harvesting for each of the varieties was early.  The median harvest date for Cabernet Sauvignon was 12 days earlier than average on 15th March.  Not all of this was a product of a warm February - it was partly a result of flowering being 4 days early, while the period from then until harvest was 8 days early.  Petit Verdot was similar, with its harvest date of 19th March being 9 days ahead of average after flowering 5 days early.  As is often the case, Cabernet Franc responded differently and despite flowering 7 days early, it was only 4 days ahead of average harvest date.  Perhaps it ripened relatively more slowly because it had a tendency to shut down under the pressure of the heat?  We’re not sure but there are some parts of the vineyard where the gravel content is high and very free draining.  In those sections, it’s quite likely the vines have less soil moisture making it more difficult for them to keep photosynthesising on very warm days.

Cabernet Sauvignon achieved 13.4⁰ Baume, slightly above its long term average of 13.2⁰.  On the other hand, both Petit Verdot and Cabernet Franc achieved flavour ripeness at slightly lower Baumes.  The former was picked at 12.3⁰, compared to the typical 12.9⁰ and the latter came in at 12.8⁰, compared to its 13.4⁰ average.

Importantly, the maximum temperature did not soar into the 40’s and so the vineyard avoided extreme heat stress and the accompanying poor composition and loss of flavour.

This is best shown by a closer look at the temperatures.  The vines experienced 1010 hours in their preferred range of 18 – 28⁰C, 6% above the typical 952 hours.  Little wonder they got to full sugar ripeness 8 days faster than usual.  Similarly, they received plenty of warmth to drive out green fruit characters.  There were 86 hours above 33⁰C, 51% above the average of 57 hours.

With such good numbers, vintages like these can be deceptively easy and 2011 was a classic for this.  Apart from keeping a weather eye on any rain that might be looming, we at Moss Wood just sat back in awe and watched the vines do their thing, marching inexorably towards harvest.  Our job was to sample effectively and make sure we completed our side of the bargain by picking the fruit at optimum ripeness, capturing the best flavours.  Needless to say, there are no excuses if we don’t.

Our production process begins with the picking and regular readers of the Moss Wood newsletter will be fully aware that all our grapes are harvested by hand into small buckets.  The fruit is loaded into bins and delivered to the winery where it is de-stemmed into small, open fermenters.  At this point, each batch is seeded with a pure yeast culture for the alcoholic fermentation and once this is underway, the tanks are hand-plunged up to four times per day.  The refrigeration system is set to maintain the ferment temperature at a maximum of 28⁰C.  After about 5 days, the fermentation is approaching “dryness” and each batch is tasted at least once per day to monitor the tannin balance and decide when pressing should be carried out.  In 2011, the wines had good balance and so skin contact was relatively short - Cabernet Sauvignon spent 12 days on skins, Cabernet Franc spent 10 days and Petit Verdot spent 12 days.  Each batch was pressed to stainless steel tanks and underwent malolactic fermentation. After completion, all batches were analysed and acidity and sulphur dioxide adjusted and then racked to 225 litre French oak barriques.

Various fining trials were then carried out but none of them improved the wine, so it was not fined.  The wine was sterile filtered and bottled on 19th November, 2013.

The fruit depth and balance of this wine is such that it has tremendous, immediate appeal and can certainly be enjoyed now and over the next five years.  However, purists need not fear because we also strongly recommend it for cellaring for at least 15 years, by which time the tannins will have softened a little and there will be some evidence of the bottle bouquet.  To allow the wine to reach final maturity and display its full array, it should be cellared for 25 years.