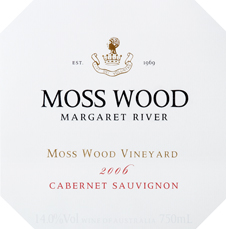 Nose: the initial impact is one of vibrant red and dark fruits, with ripe red currants and mulberries. There are also complex undertones of earth, chocolate and malt biscuits, combined with camphor and wax. The nose is then completed by an oak combination of toast, vanillin, cedar and lead pencil shavings.

Palate: this impact of fresh fruit characters continues on the plate, where the ripe red currant and mulberry provide a sweet mid-palate in particular. The tannins are ripe and provide a long platform for these fruit flavours, with a firm but smooth texture. Complex flavours of chocolate, coffee and cedar fill out across the back palate and then the finish is a combination of oak characters, including toast, cedar and malt.

Readers who live in, or who have visited, Perth will know that it is extremely rare for people in that fair city to complain that the Summer has been too cold. So it may come as a surprise to learn that this was a common complaint in 2005-06 and if Perth was cool, spare a thought for the grape growers of Margaret River, some 300 kilometres to the south, where it was even cooler still.

It is not that a mild season is necessarily bad. On the contrary, in the vineyard there is much to enjoy, especially when working outside in cooler temperatures. The vines also benefit because they are not affected by excessive heat stress, which can take a heavy toll on vine health and therefore wine quality.

However, ask anyone at Moss Wood about 2005-6 and mostly you’ll hear an expletive-laden tirade. In very cool seasons, everything in the vineyard happens slowly, really slowly. Vine vigour is dependent on the temperature and if this remains low, the rate of growth of the shoots and leaves is slow. Any vineyard management activities linked to specific stages of vine development are delayed and often difficult to carry out. A classic illustration is shoot positioning. In a more normal season, the vines’ growth is generally even and the shoots can be easily captured in the wires and positioned into neat vertical lines. In a cool season, the shoot growth is variable and the best shoot placement efforts of a fine viticulture team will still end up looking like the proverbial dogs breakfast! Very frustrating!

Moreover, cool weather is almost invariable wetter and this brings with it commensurate increases in problems with disease management and therefore more spray passes through the vineyard. In these conditions Botrytis cinerea can be particularly damaging if a careful program is not maintained. So both people and machines are under more pressure.

The same inclement weather can have an impact on the vines’ flowering. Wet and windy conditions almost invariably produce light weight bunches with just a smattering of berries and yields are substantially reduced. In 2005-06 the early varieties like Pinot Noir and Chardonnay suffered the most, however, in a curious twist, Cabernet Sauvignon must have flowered during a fine period because its bunch weights were up slightly. Its long term average is approximately 150 grams but in 2006 all blocks produced weights around 20 grams higher than that.

This translated into reasonable yield, albeit slightly below average. Although it varies between blocks, the long term average for Moss Wood Cabernet Sauvignon is 7.58 tonnes per hectare (t/ha) and in 2006 it was down by 9% to 6.88 t/ha.

Perhaps this discussion labours the point and indeed these issues of vineyard management caused us difficulties. However, the vineyard remained disease free and eventually all the shoot positioning was successfully completed. However, we still had two burning questions. The vines were telling us it had been colder than usual but how cool had it really been? What would this mean for wine quality?

It’s not too difficult to find an answer for the first part. We have a weather station at Moss Wood and it showed the average temperature for the growing season up to the end of December was the lowest since our records began in 1998. We then compared that with data from the Bureau of Meterology, which, by the way, is a highly respected institution at Moss Wood. The people there have always been happy to share their information with us, even if sometimes they will charge a small fee! Returning to the point, the Bureau’s data showed that we were dealing with the coolest season since viticulture began in the late 1960’s.

This left us with the feeling that we were sailing into unchartered waters and sent us looking back through the vintage records of the previous cool years to see what we might expect. Our most recent experience had been 2002 but we also had cool years in 1999, 1993, 1990, 1987 and 1982. This gave us some hope because followers of Moss Wood will know that amongst those vintages are some of the best wines we’ve made, especially 1990. We were confident that if Mother Nature was kind to us and she didn’t start the Autumn rains too early, the grapes would achieve full ripeness.

The weather is not something we can do much about, so we looked for things we could control. The ripeness of the grape flavours is in part dependent on the temperatures the bunches achieve each day. Up to a point, the warmer the bunch the riper the flavours. Depending on the variety and the wine style, vineyard management techniques like shoot positioning and leaf removal are used to regulate this in every season, cool or warm. Moderate leaf removal is always part of our technique with Cabernet varieties but we decided that 2006 had been so cool we needed to maximise bunch temperatures and that would require full exposure. The vineyard team went out and removed, by hand, every leaf around every bunch for all three varieties. It was time consuming and difficult work but in the end it paid dividends. Despite the cool season, the Cabernet Sauvignon, Petit Verdot and Cabernet Franc were eventually picked with no green characters which we feel was something of a triumph compared to previous cool years.

We must also acknowledge that Mother Nature played her role as well, at least for a while. She very kindly gave us better conditions in March which, based on average temperature, was the third warmest in the last decade. While that definitely helped, she changed her mind again in April and went back to cool and then finished it off with rain.

What conclusions can we draw? Yes, certainly it was our latest harvest, 21 days behind the average but it was definitely not our greenest. That is a three way tie between 1982, 1987 and 2002. Sugar ripeness came in at 13 Baume, so the wine has full body from 14% alcohol and the seeds matured to full hardness which means the tannins are not aggressive. All up, we were very happy with the result.

The harvest ripeness for each of the varieties is chosen to give us the appropriate characters. We have discussed the manner in which we manage the vineyard to derive ripe flavours but that still leaves the question of what are the preferred characteristics.

In Cabernet Sauvignon, we a try to minimise the leafy notes in the wine and with the right vineyard techniques, these are usually lost by the time the fruit has ripened to 13 Baume. At the same time, the grapes develop their best berry characters, which are usually a combination of red currant, mulberry and blackcurrant.

Cabernet Franc has a different ripening profile. In the Moss Wood vineyard it produces less leafiness than Cabernet Sauvignon and can be picked earlier. The preferred ripeness is between 12.5 and 13 Baume, when the varietal characters are fresh berries, similar to summer pudding. Further ripening tends to produce dark plum notes which are perfectly acceptable but not as vibrant.

When still slightly green, Petit Verdot has an herbal note, more coriander than leaf and as it ripens to 13 Baume it develops an ethereal, aromatic lift, redolent of violets and sweet red berries. Sometimes it even smells like perfumed talcum powder and the intensity is such that only a small percentage is necessary in the final blend.

Once each variety is harvested, their winemaking techniques are relatively similar. Each is de-stemmed into small, open fermenters and seeded with a pure yeast culture for fermentation and then hand plunged up to four times per day. The ferment temperature is controlled to a maximum of 30C and each batch is tasted at least once per day to evaluate for off characters, colour extraction and tannin balance. As fermentation finishes we monitor the progress of the latter component quite closely and once it becomes apparent the tannin balance is no longer improving, the wine is drained off skins and pressed.

After pressing the wine was settled then racked off gross lees into barrel, where it underwent malolactic fermentation. All barrels were French oak barriques and 65% were new. Once the secondary fermentation was completed, the individual varieties were racked then returned to barrel and kept separate until the 14th November, when all barrels were racked and combined to complete the final blend. The finished wine was returned to barrel, where it stayed until 21st April 2008.

Fining trials were then carried out but none offered any improvements in quality so the wine was then sterile filtered and bottled on 30th April 2008.

Cellaring notes go here...The pretty fruit characters and ripe tannins of the 2006 vintage make the wine very attractive in the short term but its composition, combined with its broad range of complex notes make it an ideal cellaring wine. In our discussions above we have referred to our cooler vintages and during 2007 we tasted the 1987 vintage on several occasions to assess its stature at 20 years of age and found the wine to have become a terrific example of the Moss Wood style. It had developed mature Cabernet Sauvignon bottle bouquet but still retained clear fruit aromas, combined with a palate structure which had softened but still has at least 5 years to go before full maturity. Using this as a guide, we believe the 2006 vintage will develop in a similar vein. It will take at least 10 years to develop its bottle bouquet, so we recommend that if people intend to cellar the wine that they keep it for at least that period. However, the wine will not show its full array until at least 15 years old and based on the 1987 example, should remain sound for well beyond 20 years.