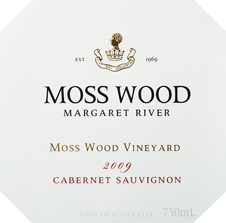 Initially the nose is slightly closed, presenting a complex combination of red currant, tar and leather.  After a few minutes breathing, the fruit aromas lift, adding mulberry and violets.  In the background there is a scented oak lift of toast and black pepper-like spice.  A classic “small-crop” Moss Wood Cabernet Sauvignon.

The theme of the palate is concentration and generosity.  Ripe red currant flavours combine with some earthy flavours and fill the front and mid-palate.  These sit over full body and excellent viscosity, the product of ripe, concentrated tannins, from both fruit and oak.  These give the wine considerable length, leading to a finish of dusty, toasty oak.

It’s not that we want to be boring but a discussion of the weather conditions for the 2009 growing season may give some readers a sensation of déjà vu.  Although, of course, we didn’t realise it at the time, we were in to the third year of a run of mild to warm vintages which has now stretched out to six, if we include the almost completed 2012.  Admittedly, the Margaret River region is very young and its history of 41 vintages only dates back to the original 1972 at Vasse Felix.  Nevertheless, in the past we have produced some great trios like ’75, ’76 and ’77, or ’94,’95 and ’96 but the run of ’07, ’08, ’09, ’10, ’11 and ’12 is unprecedented.  We can only hope it continues.

Despite the consistency of the weather, each of them has their unique traits and we see this in the 2009.  During spring 2008, we had quite cool conditions, with regular rainfall.  Generally this is beneficial, especially in an unirrigated vineyard like Moss Wood but there was a curious negative associated with it.  We occasionally find an unusual caterpillar in the vines called a Looper, because of the amusing way it forms into a loop as it crawls along.  They feed on green tissue and will chew away on the immature bunches.  Weather conditions rarely allow them to breed up to the sort of numbers that will do harm and we don’t treat for them.  However, in 2008 they found conditions very much to their liking and did quite a bit if damage, especially in the sections of vineyard in close proximity to eucalypts.

The Loopers and the rainy weather in general combined to reduce the crop quite significantly.  The Cabernet Sauvignon bunch weights were down by about 25% and not surprisingly, its overall crop was down by 23%, from 7.55 tonnes per hectare to 5.81 tonnes per hectare.

With its maritime climate, our region is notable for a lack of temperature extremes but 2009 seems to have been the most even of all.  The data from our weather station is quite revealing.  During the period from flowering to harvest, the Cabernet Sauvignon received a total of 1136 hours in its effective temperature range of 18 - 28⁰C, far exceeding our preferred minimum of 850.  At the same time we avoided extreme heat because the vineyard only experienced a total 24 hours above 33⁰C.

The cool of the season can be seen in the average temperature for the same period.  As an aside, this also shows how sensitive the vines are to relatively small changes in their environment.  Over the last decade the mean growing season temperature has varied from a low of 19.19⁰C, in 2009 as it happens, to 21.12⁰C in 2007.  This is a range of essentially only 2⁰C and yet regular consumers of Moss Wood Cabernet Sauvignon will know this has produced the full spectrum of styles, from the almost delicate aromatics of the 2006, to the plump generosity of the 2007.  Returning to the point, in 2009 we had the lucky balance of plentiful hours in the right range but avoided any extreme heat, with all its commensurate risk to quality.

There is one last observation we wish to make about the weather.  All other things being equal (and of course, they are usually not) if the temperatures are the same in 2 seasons, the vines will theoretically photosynthesise at the same rate and in which case, the one with the lower crop will ripen faster  because the final amount of sugar the vine needs to accrue is less.  It must be acknowledged that things like water availability, air temperatures, humidity and any of the other myriad items that influence photosynthesis are virtually never all the same but a good rule of thumb is that a smaller crop will ripen faster than a larger one.  This being the case, why did the 23% lower crop in 2009 take 118 days to ripen, spot on the average for Cabernet Sauvignon?  We suspect it further illustrates the influence of the cooler season.

These delightful conditions were similarly beneficial for the blending varieties.  Cabernet Franc found things very much to its liking and achieved flavour ripeness at 111 days, 6 days earlier than average and Petit Verdot was much the same.  It was ready to pick after 117 days, 4 days ahead of the mean.

The other routine issues that affect quality were no problem for us.  The birds were distracted by a good flowering of the red gums and only turned their attention to the vineyards right at the end of the season.  We applied our nets, so damage was absolutely minimal.  Also, despite the damp conditions during spring we were able to keep our fungicide program on track and had no losses to disease.

Where does 2009 sit in the Pantheon of Quality?  The answer is right near the top but it has several parts.

Although, as noted above, the average temperature for the season was low, not dissimilar in fact to 2002 (19.67) and 2006 (19.37), the numerous hours in the optimal ripening range means 2009 achieved the full flavour ripeness not seen in those years.  There is an abundance of ripe red and dark fruit.  At the same time it retains delicate fragrances, evidence of the limited hot weather.

It’s also a classic low-yield Moss Wood Cabernet Sauvignon.  The small crop years like 1981, 1988, 1995, 1997, 2003 and now 2009 have produced concentrated, brooding wines.  The nose is typified by a certain restraint and the palate by concentrated, but not aggressive tannins, all combining to give Moss Wood perhaps its most claret-like wines.

Finally, with the Cabernet Sauvignon being down on yield, allows the other two varieties to make a bigger contribution, with Petit Verdot being 8% and Cabernet Franc 4% of the blend.  The influence of the former is seen in the spicy lift of the nose and the full body and concentrated tannin of the palate.  The latter bolsters the nose with cherry and violets and a touch of chalkiness to the phenolics.

We rank it the best of our “small crop” wines made to date, just ahead of the 2003, by virtue of its more lifted aromatics and richer palate.  This was a tough admission from Keith, an unabashed admirer of the older wine.  Of its most recent siblings, the fruit aromas are slightly less perfumed than ’08 and as rich as ’07 but with more complexity.  The palate is more concentrated than either of the voluptuous older pair and is defined by its linear, chalky tannins.  Yes, great year but still not good enough to knock off the 2001.   All things considered, after such a fabulous growing season, we as winemakers have nowhere to hide and no excuses to offer.

Each variety was hand-picked at what we perceived to be full flavour ripeness, for which we use two clues, seed colour and fruit flavours.

In order to minimise aggressive tannin, we prefer to wait until seed maturity is complete and they’ve turned brown and crunchy.  If still soft and even slightly green, they can deliver phenolics which are potentially drying and bitter.

Fruit flavour is far more subjective but we believe it’s possible to recognise the appearance of the characters that are crucial for high quality wine.  In Cabernet Franc, we prefer to see dark cherry and plum; in Petit Verdot it is a dark fruit that’s more scented and blackberry-like; for Cabernet Sauvignon we look for red fruit like red currants but especially dark fruit like mulberry and blueberry.

Once received at the winery the fruit was destemmed into open tanks and seeded with pure yeast culture for primary fermentation.  Once this was under way, the vats were hand-plunged 3 times per day and temperatures were controlled to a maximum of 28⁰C.  As the fermentation reached its conclusion each batch was tasted twice daily to monitor the balance of tannins and depending on the batch, this was achieved at between 13 to 18 days on skins.  Each tank was drained and pressed and all pressings blended in immediately.  The new wines were settled, racked off gross lees and underwent malolactic fermentation after which they were racked into barrels.

Barrel aging continued until 24th October 2011, giving a final total of 30 months.  The wine was then racked, all barrels were blended then fining trials were carried out.  No improvement was noted with any of the different agents, so the wine was left un-fined.  It was then sterile filtered and bottled on 19th December, 2011.

Our experience with the wines from low yielding years is that their aging is much slower.  While the 2009 has terrific red and dark fruit depth, making it well balanced enough to drink now, it is certainly a “keeper”.  On this basis, we are still happy that it will develop along the lines of the Edmond Penning-Rowsell benchmark and will need 10 years minimum cellaring to shows the beginning of its bottle-age characters.  However, using the 1981 vintage as our guide, we expect that it will need 20 years cellaring to show a predominance of these notes.  We quickly add that we do not expect the ’09 to be as tight and slow-developing as the ’81 because the crop level was higher.  In 1981 the vineyard produced a mighty 3.87 tonnes per hectare, making the 5.81 tonnes per hectare of the younger wine seem positively bountiful!