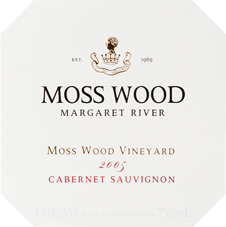 The Moss Wood 2005 Cabernet has a pure voluminous fruit statement of perfumes of violet, fruits of the forest, mulberry, blueberry and blackcurrant aromas - the palate is a statement of vibrant dark fruits which fill the palate from front to back. There’s tight structure, balance and opulence (though it’s not soft and plump) with flavours jumping out and grabbing you by the throat. The oak flavours and the tannins sit seamlessly at the back, giving the wine near-perfect balance.

Peter Forrestal comments that this is an exceptional Moss Wood Cabernet, wildly fragrant with intense, fine blackcurrant and dark plum flavours, fleshy, velvety texture, and neatly integrated fine, ripe tannins on a finish that lingers. It is tightly structured and quite firm in the mid-palate at present although it is showing some beguiling succulence that marks it as a wine with a huge future.

In our view the 2001 remains the Moss Wood Cabernet of this decade, yet in reality, the 2005 is at least as good.

In 2005, vine balance and seasonal conditions were better than the excellent 1995 and 1996 vintages while the outstanding 1999 falls somewhere between the two poles of 1995 and 2005. The upgrading of equipment at Moss Wood in 2000 gives the 2001 and 2005 vintages a distinct advantage over the earlier years - in quality terms.

The season leading up to the 2005 harvest was almost copybook with conditions ideal for vines. The fruit set was good and the rainfall throughout the season was adequate. It rained at the end of the cabernet harvest - after Moss Wood had finished picking. So with the grapes in pristine condition, it was a great year for cabernet at Moss Wood. The pretty aromas during fermentation confirmed, for the winery team, how good the season had been.

It had been, however, challenging at the start. There had been regular rainfall throughout the spring, which meant the spraying program to control fungal disease had to be rigorous. At Moss Wood, the biggest threat comes from powdery mildew. This disease found its way into Europe from America during the nineteenth century and, like many other pests and diseases, it was also introduced into Australia’s vineyards. The French used sulphur to combat powdery mildew and that is also the key agent for control at Moss Wood.

Although sulphur has been used for many years, no resistance has built up against the chemical because it acts to interrupt the development of the fungus at numerous stages in its life-cycle. This makes it the chemical of choice, especially during the early and middle stages of the growing season. However, it does have some drawbacks, one of which is that not being rain-fast, it must be re-applied after moderate precipitation. This means that during the 2005 season, the vineyard team spent many hours on the tractor reapplying the sulphur coverage. It was definitely worth their efforts because at harvest the fruit was completely disease free.

As always in viticulture there were swings and roundabouts. While the rain caused some difficulties, it was very good for the vines, providing plenty of soil moisture. In particular, it meant that there was no stress at the end of the season, allowing the fruit to ripen consistently to the end.

The winemaking process for the Moss Wood 2005 Cabernet proceeded along traditional lines. The fruit was hand picked, destemmed into open tanks, hand plunged four times a day until dryness after which it was plunged once a day and monitored for tannin extraction. The temperature in the fermenters was monitored so that it did not exceed 30°C. Once the team felt that the wine had achieved balance, it was pressed and racked into barrel for the malolactic fermentation. Typically, Moss Wood Cabernet is left on skins for ten to 14 days post fermentation and this was the situation in 2005. In the first year, the batches were kept separate for barrel trials and monitored. After twelve months, all batches were combined and then racked back into barrel. At the end of the second year, the wine was racked into stainless steel tanks in preparation for bottling. Fining trials were conducted and as it was felt that fining did not improve the wine, none were carried out. The wine was then sterile filtered and bottled on May 1st 2007.

This as an exceptional cellaring prospect: given ideal conditions, it should thrive for at least 20 years, although it will live for longer.