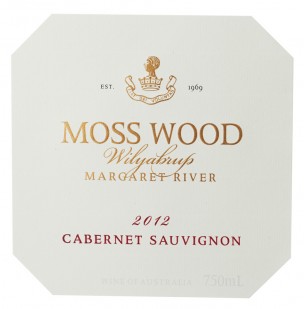 In keeping with such a good season, the Moss Wood 2012 Cabernet Sauvignon ranks right up there with the best wines we have made and continues our dream run of quality vintages dating back to 2007.

The wine has an especially vibrant nose, with all sorts of lifted scents. There are violets, raspberries, mulberries and red currants fairly jumping out of the glass but underneath looms the classic complex notes of leather, earth, cedar and tar. Oak notes add further complexity. On the palate the theme of bright fruit notes continues. Generous mulberry and red currant flavours fill the palate and they sit over quite a firm tannin structure giving the wine good weight and length. It carries the Moss Wood hallmark of youthful balance and drinkability.

No doubt about it, the 2012 growing season was excellent. Rainfall through 2011 was very slightly above average and in particular, rain through the growing season amounted to a respectable 238 mm, keeping our dry grown vines nicely watered. Luckily for us it fell at the right times so as not to disrupt flowering and yields for Cabernet Sauvignon, Cabernet Franc and Petit Verdot were all up by around 5%. Our good fortune continued with Summer temperatures warm enough to promote consistent ripening. After a hot Australia Day, where the temperature topped out at 40.8, the vines settled into nice autumnal conditions, gradually proceeding to a maturity of 13.8o Baume on 22nd March. Ripeness was 5% above average and occurred 2 days earlier than average. Fruit condition was excellent with no disease or damage problems.

As is always the case at Moss Wood, to maximize quality, picking was done by hand. Despite the much greater expense, this is the only method that ensures absolutely sound fruit is delivered to the winery. Each variety was destemmed and the berries transferred to small, open fermenters. For reliable quality outcomes, fermentations were by pure yeast cultures. Each batch was hand plunged up to 4 times per day and the wine stayed on skins until the best balance of tannin was achieved. This was typically 12 to 15 days. All batches were pressed then underwent malolactic fermentation before being racked into 225 litre French oak barrels, 20% of which were new.

After 32 months wood aging, the wine was racked from barrel, lightly fined with skim milk and then sterile filtered and bottled on 18th Nov, 2014. The final blend is 95% Cabernet Sauvignon, 4% Petit Verdot and 1% Cabernet Franc.

Being such an attractive wine it is delicious to drink now. However, it is a wine in the mould of previous vintages like 2008, 1996 and 1985, especially the latter, if slightly more tannic than that vintage. Accordingly, for those who enjoy some maturity in their wines, we recommend a minimum cellaring time of 10 to 15 years. For those who like fully mature characters, the cellaring requirement is 20 to 25 years.