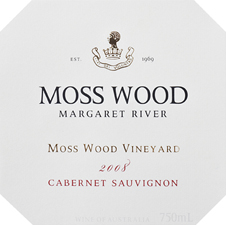 Nose: This shows a classic snapshot of what the 2008 vintage was all about. Of course, the aroma contains the typical Moss Wood Cabernet Sauvignon characters of mulberry and red currant but these are given significant lift by pretty notes that can be traced back to the early Autumn. Cabernet’s rose-like and pomegranate scents are not often retained but in this wine they help the nose fill the glass. In the background the wine still retains the typical dark chocolate, earth and leatherlike complexities, as well as spicy, toasty oak.

Palate: Perhaps the observation could be made this displays the warmer, early phase of the season. A classic Moss Wood Cabernet Sauvignon, with fully ripened fruit flavours of mulberry and raspberry, that are long and generous. These sit over good acidity and wellbalanced, fine-grained tannin, giving a seamless feel. The finish is a combination of oak flavours and tannin that extend the length.

Although the growing season 2007/2008 was near copybook, it had two quite distinct phases.

It started with bud burst dates all close to average but as the season progressed,Spring temperatures gradually warmed, speeding up vine development. This produced a curious anomaly between the early and late varieties. Pinot Noir, for example,flowered on 10th November 2007, which is exactly its average flowering date. On the other hand, Cabernet Sauvignon, which has a budburst about 4 weeks later and would normally flower on or about 26th November, went through on the 15th, so obviously the late Spring weather was warm and very much to the vines’ liking.

As Summer progressed, the warm theme continued and meant we anticipated an early harvest. Things went very much as planned when we started picking the Pinot Noir on 4th February, meaning it had taken only 88 days to get from flowering to harvest, about 7 days faster than normal.

Everyone assumed we would have another 2007-type year and vintage would be over in one big rush.

However, at about this time, the weather began to get adistinctly autumnal feel and the nights, in particular, became quite cool and so we had reached the second phase. A look at the temperatures reveals overnight minima for February and then March were the lowest we’d had for some time, so we didn’t just imagine it. The cooler weather slowed the ripening and we began to delay each pick until by the time we got to the Cabernet Sauvignon harvest, the pace had become almost leisurely!

Although we approach each new vintage with specific intentions about how each wine will be made, invariably the best laid plans of mice and men tend to unravel as the pressure comes on. However,in 2008 the early Autumn meant we had the good fortune to be able to watch and wait as each block came gently to maturity and it made for an unusually orderly process.

There are 5 different Cabernet Sauvignon vineyards at Moss Wood and all are picked and made separately. Each block has particular traits which come together in the final blend to make the wine that consumers would recognise as our Cabernet Sauvignon.

In 2008, as each section matured we picked it, then waited for the next to be ready. These blocks are literally only metres apart but there are sufficient differences in soil profile,aspect and altitude for them to have unique flavours.

Astute readers will have noted that, for the vineyard as a whole, 123 days elapsed between the median flowering and harvest dates which is just slightly later than the average of 118 days.

The blending varieties tell a similar story. The earliest of them, Cabernet Franc, was picked on 3rd March, 109 days after flowering and some 8 days earlier than average.

Petit Verdot, at the other end of the ripening continuum came off on 28th March, 124 days after flowering and 3 days later than average.

What are the implications for quality in all of this? Fortunately, all parts to the answer are positive. A poor Redgum flowering meant there was some difficulty with the birds but most of this was confined to the Semillon and the nets proved an effective deterrent on the reds. Yields were not excessive, with Cabernet Sauvignon and Cabernet Franc both slightly below average and Petit Verdot slightly above. Since the season was generally warm and only cooled off towards the end, the vines enjoyed more than sufficient hours in the best temperature range for ripening.

A further benefit was 42 hours accrued above 33°C, more than enough to see off the green fruit notes but not enough to cause damage.

In response, the vines produced fruit with lively, vibrant aromas which are usually the preserve of a cooler year. At the same time, there is sufficient ripeness to have the complexities of the dark fruits and leather and earth and this makes it quite special. Looking back to find a comparable year, if pushed we would liken the style of 2008 to 1980. They share a similar ripeness in terms of both fruit characters and alcohol but we would hasten to add the seasons were somewhat different, with 1980 having a median harvest date some 5 days later. Regardless of any small differences, the 2008 is right up with the best of our Cabernet Sauvignon wines.

All the fruit was hand-picked and delivered to winery where it was destemmed into open,stainless steel fermenters. The must was then seeded with a pure yeast culture and fermentation progressed with temperatures controlled to a maximum of 28 C. Each batch was hand plunged up to four times per day and was tasted daily to monitor tannin structure. In the end, all batches were left on skins until the best balance had been achieved and this varied from 14 to 18 days. After pressing and settling, the wine was racked to barrel where it underwent malolactic fermentation. Once this was completed, each batch was racked, adjusted and returned to cask, where it stayed until December 2010. All the barrels were 225 litres French oak barriques.

After barrel aging the wine was racked and fining trials carried out, in preparation for bottling. As is most often the case, none of the trials improved the wine and so it was left unfined. It was then sterile filtered and bottled on 13th January 2011.

The youthful generosity of this wine is very appealing and there will be a temptation to consume it young. However, with a similar style to the 1980, we strongly recommend the 2008 be cellared for at least 10 years, by which time it could be enjoyed with some bottle development. We believe it will be at it most complete by around 15 years of age but it should live on for many years beyond this. In order to satisfy our curiosity, we recently tried the older sibling, the Moss Wood 1980 Cabernet Sauvignon Special Reserve and are delighted to report, for that particular bottle, it has reached 31 years old and is still in great shape, even retaining some primary notes.