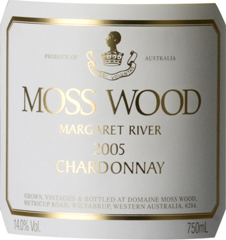 The 2005 Chardonnay has attractive fruit characters of nectarine, peach, quince and melons with hints of malt, nougat, lime and honeysuckle. Zestiness and vibrant fruit flavours, pleasing firm structure and high acidity will enable the wine to age well.

The 2005 vintage at Moss Wood for chardonnay was much the same as it was for semillon - with the rain during vintage coming well after the chardonnay had been picked. The substantial rainfall which Wilyabrup experienced during spring affected berry set, resulting in lower bunch weights than usual. Although reduced yield is disappointing, there is the bonus of increased concentration in the chardonnay. The other characteristic of the vintage was even temperatures during the growing season and therefore gradual accumulation of sugar and flavour development and the retention of bright fruit characters.

While we have a real affection for the concentration and generosity of the warm years like 2003, it is generally felt that the whites at Moss Wood are best in the cool to very cool years like 2002, when they can be delicate and show refreshing natural acidity. The 2005 vintage brought the double bonus of the delicious fruit characters of a cool year with a ripeness of flavour that came from the fine weather leading up to harvest. Producing a Chardonnay with good fruit depth, impressive weight and generosity without high alcohol. Above all, it was a year of great balance.

Over the past few years, we have worked very hard to refine the style of the Moss Wood Chardonnay. It is one of the great challenges in winemaking, for all varieties really, to be able to produce table wines that have intensity and length of flavour, without being so heavy that they lose their appeal. For Chardonnay, this has meant earlier picking, achieved by improving fruit exposure to encourage maximum flavour and taking extreme care to see that the picking time optimises ripeness by being accurate to within one day. These objectives need very careful sampling - even twice a day - to ensure that we pick at the right moment. It’s almost a matter of getting the time of harvest down to hours rather than days.

Obviously, in warm conditions the baume can rise dramatically - as much as 0.5° in two days. Each block is monitored separately and is considered in terms of the contribution it will make to the final blend. We’ve found that multiple sampling can enable us to better monitor the rate of ripening and the blocks are picked to minimise or smooth out any errors so that we finish with a balanced chardonnay.

Careful vine canopy management has been a part of the Moss Wood program for 20 years but we have established specific viticultural trials over the last four vintages to better understand the role of fruit exposure in the finished wine. For example, in 2005 each block was picked in two halves - with different leaf plucking regimes. Half was leaf plucked by hand to give complete exposure of the grapes. The other half was plucked by machine, giving partial exposure and each trial was sampled and harvested separately. The fully exposed component contributed fruit aromas of melon, peach, nut and malt flavours to the wine, with richer texture and more substantial tannins. The partially exposed component provided characters that tended more towards grapefruit, citrus and honeysuckle blossom and vibrant citrus notes especially on the mid-palate. When seen as separate components, we preferred the fully exposed portion but the blend of the two is significantly better than either batch alone.

The recent Moss Wood Chardonnays are more in the style of the 1980's which were consistently picked between 12.5 and 13° baume. The current Chardonnays are picked between 12.8 and 13° baume and so the amount of alcohol they contain varies between 13.8 and 14%. They have lower pH in 2004, 2005 and probably in 2006, making the wines appear more “minerally”. From the progress that the 2003 has made, we can already see that chardonnay with high acidity to begin with, fills out and softens even in the first few years after release.

The wine making process for the Chardonnay remains the same, although the spirit of enquiry and rigour is evident in the winery as in the vineyard. A trial was carried out to satisfy the team’s curiosity by ageing a barrel of this wine in a one year old barrique. Blind tastings have shown a conclusive preference by the group for the wine aged in new oak. Over the last 20 years, we have revisited this issue on 3 occasions (1985, 1997 and 2005) and each time we have come to the same conclusion.

The procedure for the 2005 Chardonnay was pretty much the same as usual although the amount of lees stirring was reduced - to emphasise primary fruit characters. As was the case for the first time last year, the fruit was "whole bunch" pressed. The juice was settled for two days and then racked to stainless steel (with 2% solids included) for inoculation at the correct temperature. The must was then racked into 100% new French barriques where it underwent primary fermentation. It was then inoculated for malolactic fermentation and about 30% went through. After that the wine was racked into tank, adjusted for acidity and sulphur dioxide, and returned to the barrels with its lees. In February this year, it was racked from barrel, checked, fined for protein stability and then filtered and bottled.

Well-cellared, we expect the 2005 Chardonnay to soften and develop toasty nutty complexity over the next ten years at least.