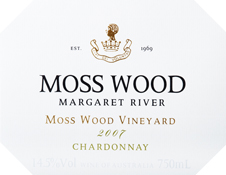 The wine shows floral aromatics and cashew note, melon, peach and grapefruit flavours with honeysuckle lift and some nut, linseed oil, smoked oyster, malt and creme brulee complexities. It is voluptuous with pretty aromas and flavours, vibrant on the palate, full-bodied and with good length and the tannins sitting well across the mid-palate and finish. It delivers intensity of flavour with the balanced natural acidity to cellar well.

Review by James Halliday in The Wine Companion

The 2007 vintage for chardonnay at Moss Wood was notable as the earliest on record - with the median harvest date of 10th February, ahead of 1988 which took place two days later.

In 2007, this was caused by an early budburst and a slightly shorter growing season than usual. Ripening normally takes place over a hundred days but only took 98 days leading up to the 2007 chardonnay harvest. Importantly, this took place evenly over all the chardonnay blocks. The vintage also produced a record 21 tonne crop. The previous largest was 18 tonnes in 1991 and which is probably the genuine record because this occurred without the inclusion of grapes from the School Fees Block (planted in 1995), which contributed nine tonnes to the 2007 total.

The quantity of chardonnay produced at Moss Wood varies enormously from year to year, as a glance at the Chardonnay Vintage Chart shows. The variety is sensitive to poor weather conditions at flowering and Moss Wood often experiences tricky conditions in spring with flowering being disrupted by rain, with wind damaging the vines and affecting photosynthesis and with hail. The cool, wet spring leading to the 2006 vintage had such a negative impact that the yield from the Moss Wood vineyard was reduced to 8.4 tonnes of chardonnay. Fortunately, the quality of the 2006 Chardonnay justified the agony of such skinny yields.

In 2007, the consistently warm ripening season saw a burst of heat around Australia Day which brought harvest forward with a rush. Fortunately, the vines were in great shape with no disease or moisture stress so the fruit was in good condition.

The method by which the wine was made is that traditionally used at Moss Wood. The grapes are hand picked, destemmed and then pressed. The juice was then chilled and settled for a couple of days before fermentation was begun with pure yeast culture. After 48 hours, the fermenting must was racked into 100% new French barriques where it completed the primary fermentation. The usual coopers - Remond, Rousseau, Cadus and Seguin Moreau - were used. There was a continuation of the policy, introduced last year, of only stirring the lees once a week until the malolactic fermentation. As expected, we feel that this enhanced the wine’s fruit freshness.

The wine was then inoculated and about 30% went through the malolactic fermentation. After that the wine was racked into tank, adjusted for acidity and sulphur dioxide, and returned to barrels on its lees until January this year. It was racked from barrel, checked, fined with bentonite for protein stability and isinglass for tannins, cold stabilised, and then sterile filtered and bottled. This leads to our final point on the vagaries of chardonnay yields. Altogether, just 1315 dozen of the 2007 came down the bottling line: well up from the previous year’s 380.

There is ten years plus in the bottles that are well-cellared (away from light at a constant temperature, preferably below 16°C).