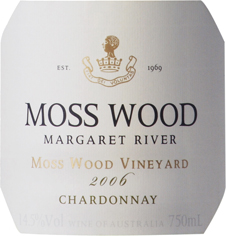 The Moss Wood 2006 Chardonnay is a beauty.

The wine is bright, vibrant and primal with plump, generous flavours. The oak is overt at present but will settle down in the short term.

The 2006 vintage would have tried the patience of even the most saintly. The mild-mannered proprietors were close to using expletives to describe the weather, especially toward the end of January.

At this stage, it was so very cold - the average maximum was four degrees below normal and so the ripening process was ridiculously slow. The air temperature was low, so the vines looked yellow and couldn’t grow properly - vigour was anything but vigorous. Cool of itself, is not a great concern, indeed, the cool seasons can produce some of the finest wines. However, as someone once noted, there is a fine line between pleasure and pain. If the season is too cool the wine will be thin and green but one or two days of extra heat is enough to accrue the right flavours and balance. Then there is the additional worry that the longer ripening goes into autumn, the greater the threat of rain and 2006 was looking to be so very late that we were not just paranoid about the cabernet, we were even nervous about the chardonnay.

And so it was that in the end we finished with pleasure, not pain. Things warmed up in February and thanks to absurdly low yields, the fruit got to 13 Baume and full flavour ripeness. In a moment of calmness, it was probably a blessing in disguise that the flowering was so poor and bunch weights (and therefore yields) so low, otherwise the grapes may never have ripened. Perhaps we had the best of both worlds for Chardonnay, with low yields for concentration of flavours and a long, gentle season to accumulate the full range of flavours.

This was evident right from the start because although it was a difficult year and a relief to get the grapes in, the fermenting wine gave immediate indication of the vintage quality, showing a clear stamp of freshness on the fruit character - bright lime citrus notes, fine, zingy, fresh, crisp acidity which continued throughout the barrel fermentation and aging process.

As usual, it was whole bunch pressed, cold settled and racked into barrel for fermentation. This year, there was less battonage than usual - once per week rather than daily to better retain the fruit freshness of the wine. About a third went through malolactic fermentation. After ten months in barrel, it was fined with bentonite for protein stability, cold stabilised, sterile filtered and bottled. A grand total of just under 500 cases were made.

Pre-blending, there were extensive tastings to check on the choice of barrels and to compare the effects of different levels of fruit exposure in the vineyard. The results have been fascinating. The oak trials confirmed our preference for the Tonnellerie Remond barriques, with an interesting dimension added by Tonnellerie Rouseau. Other barrel trials will continue, even though we believe this combination suits the wine admirably. The vineyard trials consisted firstly, of the grapes fully exposed with no leaves around the bunches, and secondly, with no leaf removal. The wine with all leaves removed is a more complex style of chardonnay with accentuated malty and roasted nut characters while the wine with none removed tended to retain citrus, honeysuckle and peach blossom aromatics and looked prettier than the other.

While both components looked good, we preferred a blend of the two over each of the individual components. This combination was continued with the 2007 vintage and the early indications are the result will be the same.

The structure, tightness, concentration and depth of the Moss Wood 2006 Chardonnay suggest that the wine will improve over the next two or three years and, with careful cellaring, can be enjoyed over the next decade.