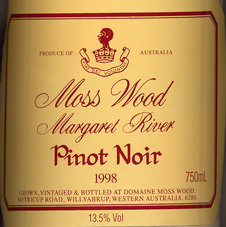 The Moss Wood 1998 Pinot Noir is beautifully fragrant with ripe, raspberry, dark cherry and spicy oak aromas; soft, velvety, fleshy texture; dark cherry and plum flavours and quite firm, dry tannins. There are some complex tobacco leaf, spicy, gamey notes which are likely to develop as secondary characters with age. It is a vibrant, rich and concentrated pinot with good varietal definition, a degree of finesse and substantial weight.

Those who dabble in vintage charts would have you believe that 1998 was a difficult vintage for red wines in Margaret River. While that is true of Cabernet Sauvignon which had to wait until after the impact of the heavy rains of early (50mm on the weekend of the 7th and 8th) and mid March (78mm on the 21st and 22nd), the earlier ripening pinot noir had been picked well before these conditions were to trouble the vigneron.

The spring of 1997 had been reasonably good to Moss Wood in spite of some hail which reduced the pinot crop a little. The winds had been less troublesome than the previous year and spring rains were plentiful. A mid-January dose of rain gave the vines a pre-harvest boost which, combined with ideal ripening weather, made for a very good pinot noir vintage. Although the Redgums failed to flower and the Silvereyes attacked the early ripening varieties with more than usual vigour, the use of netting at Moss Wood reduced the loss of crop to a minimum. The pinot was picked a touch over the desired ripeness at 13.6 degrees beaume.

This was the first vintage following Keith's most recent trip to Burgundy where he worked with Gerard Potel at Domaine de la Pousse d'Or in Volnay. Since 1991 he had been adapting Burgundian technique to the situation at Moss Wood and the time in Burgundy gave him renewed confidence in that approach.

We used sulphur dioxide and low temperatures to arrest fermentation so that the grapes can be given a cold soak for 48 hours. This maceration of grapes encourages contact between the must and the skins and enhances extraction of colour and fruit flavour. As no alcohol is involved at this stage of the process, this is able to occur without extraction of tannins. Post Burgundy, we were even more rigorous in keeping temperatures low to allow this pre-fermentation maceration. It has been usual to leave the wine on skins for 48 hours after fermentation: that is, after 0 degrees beaume has been reached. The Burgundian approach had been to taste the wine regularly to monitor the changes in tannin structure. With time on skins, the tannin structure softens. As soon as there ceases to be a continued improvement in the softening of the tannins, the wine is taken off skins. The result, we believe, is a better balance of fruit and tannins.

The Burgundians are fussy about getting wine into barrel quickly and make sure that it goes through the malolactic in barrel. In the past, we have been happy to allow the Pinot to remain on its gross lees in stainless steel, especially as it is easier to control the onset of the malolactic fermentation in a large tank. However, with the 1998 vintage he allowed the wine to settle for five days on its gross lees before transferring it to barrel where it underwent the malolactic.

As usual, the Pinot Noir was given 22 months in oak, one-third of which was new. As always it was given light filtration through a silk stocking before being bottled.

While it is difficult to make specific comments about the influence of the new techniques, we believe that they have made a difference. We will continue to implement them as part of the standard winemaking procedure at Moss Wood.

Like most of the Moss Wood Pinots, it has the structure, power, depth of flavour and acidity to ensure a medium term cellaring future.