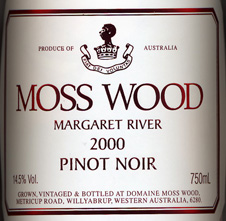 The Moss Wood 2000 Pinot Noir is medium ruby red in colour. On the nose, it has some red berry fragrances of strawberry and plum as well as notes of quince jelly, marshmallows and charry oak. The palate has medium weight, with attractive dark cherry and red plum flavours and is soft and generous. This last feature may well be a product of the wild yeast species - they are renowned for improving the texture and mouth-feel of a wine. It may seem a bit contradictory that we no longer use the technique, however, the effect may be more pronounced in a more delicate vintage like 2000. In a normal year, the Moss Wood Pinot Noir may be naturally more concentrated and would not need these extra adjustments. There are also nice toasty oak flavours and balanced tannins on the finish.

The initial signs were very good with excellent growing conditions until the end of 1999. At that time, the weather warmed up considerably and December 31st was the hottest day of the year. Temperatures did moderate in January and Moss Wood had some useful rain towards the end of that month. The vines loved the moisture and, as it was not accompanied by disease, everything was on target for a normal crop of 100 grams per bunch or 3.5 tonnes/acre (9 tonnes/ hectare). Moderately warm conditions meant even ripeness and good flavour development though, the Moss Wood team were surprised when the first of four batches picked (on 28th February) registered 14.2° of alcohol equivalent. However, this was not the only surprise in store. The size of the bunches also caught the vineyard team unawares with the bunch weight averaging 150 grams. The impact of these bigger berries shows up in the colour of the wine which is lighter than average.

Like all the wines made from the 1999 and 2000 vintages at Moss Wood, this pinot was made using wild rather than selected pure yeast strains to see if this approach would improve the complexity and texture of the wines. Our view is that it hasn't made a great deal of difference.

As usual, the grapes were chilled and given a blanket of sulphur dioxide and allowed to cold soak for 48 hours - to enhance extraction of colour and fruit flavour. The grapes were then left at ambient temperature to start fermenting by themselves. This occurred without fuss. After fermentation, the wine was left on its skins to allow the tannin structure to soften. This was monitored and the wine was taken off skins when there was a balance between the fruit and the tannins and there was no longer any perceptible softening of the tannins. With the 2000 Pinot this took 14 days. The wine was then transferred into stainless steel and racked off its gross lees into barrels where it was allowed to go through malolactic fermentation. After this process was complete, the wine was racked into stainless steel once more. Analyses were checked and it was returned to barrel as one homogenous blend where it remained for 18 months. As usual 33% of the 228 litre French barriques used for oak maturation were new. Finally, the Pinot was lightly fined, filtered and bottled.

The generous fruit flavours and soft structure will make the 2000 delicious early drinking over the next few years. In a recent comparative tasting the 1982 vintage clearly showed that the higher yielding years will keep for at least 20 years and the 2000 should be no exception.

Pinot Noir as a variety really rewards bottle age. In general we would expect our pinot noir wines to start to show their full potential at 7 years from their vintage and be giving their peak performances somewhere between 10 -15 years.

Please note: These comments are only accurate when the wine has been carefully cellared.