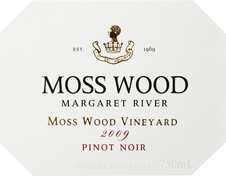 Bright, rich nose of cherry, plum, roses and spices, showing great lift but complex notes provide depth underneath, with touches of earth and spicy oak. A terrific combination of concentrated fruit and complexity.

Palate: This same impact of depth and concentration appears on the palate, with bright cherry and plum flavours lighting up the front and mid-palate. The wine has full body, and great texture with balanced tannins that add length but leave the finish long and smooth. The soft oak adds a nice note at the end.

The weather was somewhat inconsistent during the Spring of 2008 and the period during the Pinot Noir flowering was particularly difficult. The median flowering date was 11th November, 2008, which is very slightly later than the average of 8th November. During the preceding two weeks, significant rain fell and then in the last week, temperatures dropped, with the overnight minimum twice falling to 4⁰C. Conditions were not ideal and not surprisingly, the yields were down and this can be traced back to the bunch weight, which at 108 grams was 8 grams (7%) below the long-term average. The overall yield of 4.03 tonnes per hectare was 38% down on the long term average of 6.49 and is the third lowest on record. Only the 1980, was reduced to 2.95 tonnes per hectare by bird damage, and the 1981, reduced to 3.48 tonnes per hectare by wind and hail damage, were lower. This was not all bad news because with Pinot Noir, our experience suggests high yield can have a negative effect on quality. In general, much is made of this in critical discussion of the variety. The greatest Moss Wood is still considered to be the 1981 but there are other wines of almost the same quality that came from higher cropping years. The 1985 at 5.75 tonnes per hectare, the 1990 at 6.99 tonnes per hectare, the 1995 at 7.04 tonnes per hectare and the 2005 at 6.13 tonnes per hectare are obvious candidates and prove that it’s not as simple as we might think.

The traditional view in Burgundy is to produce high quality Pinot Noir, the yield should not exceed 40 hectolitres of wine per hectare. The long term Moss Wood average of 6.49 tonnes per hectare converts to 44 hectolitres per hectare. This shows that at least part of the answer may lie in the fact that Moss Wood, as an unirrigated vineyard, has relatively low production levels, so even our big years are not high by wider industry standards.

Perhaps it’s best to conclude that yield is just one of a range of contributors to quality. The reality is that not all the low yielding years are great, 2002, at 4.29 tonnes per hectare being a good case in point. That growing season was very mild and we had high expectations, anticipating a rival for the ’81 but things didn’t turn out quite as we’d hoped. Although crops were small and the season cool, the wine, which is of perfectly good quality, never quite reached our lofty expectations. It would seem that sufficient warmth, at the correct time, is probably of greater importance than yield. One of the curious things about low crop wines, of any variety, from our vineyard, is they frequently have restrained aromas on the nose and concentrated, “grippy” tannins on the palate. The 1981 is the only real exception to this.

The relatively mild nature of the season continued on from the Spring, because the ripening time from flowering to harvest was 107 days, one week longer than the average of 100. It meant the fruit ripened in relatively mild conditions, without being to cool, so picking ripeness was exactly the same as average, 13.3⁰ Baume, enough to give good weight but without exceeding 13.5% alcohol.

All the fruit was hand harvested. Processing at the winery was typical for Moss Wood Pinot Noir, with destemming into small, open, stainless stell fermenters, where the must was chilled down to 8⁰C and allowed to cold soak for 48 hours before being seeded with a pure yeast culture. Fermentation then proceeded at temperatures up to 30⁰C and were hand plunged up to 4 times per day for extraction. After 14 days on skins each batch was pressed, racked to barrel and underwent malolactic fermentation. After this was completed the wine was racked, adjusted and returned to barrel, where it stayed until December 2010.

In preparation for bottling, fining trials were carried out but the wine was well balanced and fining was not required. It was then sterile filtered and bottled on 14th January, 2011.

A delicious wine, with great early appeal, this is also a tremendous cellaring prospect. It will need at least 10 years to produce a reasonable level of bottle bouquet, by which time it will have built more earthy complexity. However, looking at the development of older Moss Wood Pinot Noirs, its very best will take more like 15 to 20 years, by which time it will be at its most complete. Beyond this it will continue to age well and should last at least 25 years, in a good cellar, before the fruit notes begin to diminish.