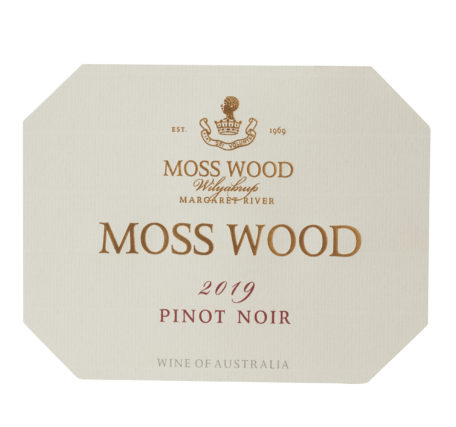 Moss Wood Pinot Noir frequently defies preconceptions of the potential of Pinot in Margaret River. Blind tasted it sits comfortably with high end Pinots from more noted Australian and New Zealand Pinot Noir regions. So it is with Moss Wood Pinot Noir 2019 which is pretty and bright with strawberry…

I’m sure that the team at Moss Wood are sick and tired of the ‘does Pinot Noir work in Margaret River?’ debate. No question that there are better regions, more suited to the glories of this wonderful variety, but in the end, it all depends on what is in the…

Great to see Moss Wood Pinot Noir in such fine form in 2019 with the cooler vintage clearly working in its favour to produce a standout vintage and potentially a new high water mark for this label – only time will tell. A lightish Pinot colour, not such a bad…

Moss Wood was one of the first in Margaret River to make a pinot noir – that was the famous 1981 vintage. This is an example of how the cooler vintages can work in favour of these varieties. Aromas of cherry with a mix of dried herbs and the faintest…

One of wine’s great attractions is the natural variations in style that come with each new season.  It’s a fascination for both winemakers and consumers.  On the production side, vignerons are mere spectators while Mother Nature goes about her business and as events unfold, we wait to see which new direction we might be going in.  So, it was in 2018/19 growing season.

The fun started right at the beginning, when we had a frost on 16th September.  Luckily for the Pinot Noir, the vineyard is situated high enough in our valley for the cold air to drain away on a frosty night, so no problem there.  However, the cool weather continued right through the full season and the median flowering date for the Pinot Noir was over 2 weeks late on 26th November.  If the days are mild, the nights can be cold and we had 9 days when the temperature dropped below 8°C and indeed, on the 30th November, we had a very cool 2.9°C.  Add to that we had 48mm rain on 8 of the 36 flowering days.  This is not particularly wet but does add insult to the injury caused by the low temperatures.  The net result was bunch weights were down by around 15% and at 5.78 t/ha, likewise the overall yield.

We hoped this might be an end to things but Mother Nature wasn’t yet finished.

At the end of January 2019, she decided to give 68mm of rain and then a further 31mm just before we started picking the Pinot Noir.  This led us into some interesting winemaking.

By the time the rain came, the fruit had ripened to the point where it was changing colour and softening.  Pinot Noir, as always, responds in a way all its own.  The grapes very rarely split but because the berries are tightly clustered, they can tear from the stems.  Many will simply drop off the bunch and when we walk through the vineyard, we find lots of them lying under the vines.  Those that remain in the bunch dry out, leaving quite a few raisins and these, of course, increase the sugar level of the juice.

The complication is, the sound berries that provide the major fruit flavours in the finished wine, remain relatively immature, so, to avoid green notes, we wait until they have reached full flavour maturity before we harvest.  To get the balance right we have to sample regularly and carefully.

This leads to a surprising result, where a cool and slightly wet vintage produces a slightly riper wine but often with the finer, early fruit notes still intact.

When all the boxes were finally ticked, we got under way on 8th March, roughly two weeks later than average, with a ripeness of 14.2 Baume, notably above our average of 13.4.

All the fruit was hand-picked, sorted and destemmed into small, open stainless steel fermenters.  After cold-soaking for 48 hours, each batch was seeded with multiple yeast strains for primary fermentation and then hand-plunged 3 times per day. Temperature of fermentation was controlled to a maximum of 32°C.  The wines remained on skins for 15 days and were then pressed to stainless steel tank.

Once malolactic fermentation was completed each batch was adjusted and racked to 228 litre French oak barrels, 12% of which were new.  In October 2020, after 20 months aging, all barrels were racked and blended in stainless steel and fining trials were carried out to assess tannin balance.  There was no improvement, so the wine remained unfined and was then sterile filtered and bottled on 2 nd November, 2020.

The bright fruit note theme continues with strawberry-like red fruits, plus plums, cherries and rhubarb filling the full length of the palate.  There is medium body, so the mouthfeel is generous and then the finish is a balanced combination of toasty oak and tannin.

Given the ripe stature and power of the vintage described above, this will be a long-lived Pinot Noir.  Sure, it has a lovely and approachable generosity now but over the next 20 years it will build into a really complex wine.  For those who have the cellar space and the patience, it will definitely be worth the wait.